From time to time I enjoy conducting my own informal social experiment.  It's fun to "mix things up." That is, do things differently to see how people will react. You just don't know what people will say, do, or not do!

I live in a town that has had two World Series Championship titles in the last three years (okay, it's now four years...dang). It's hard to go anywhere for very long without seeing the orange and black and I love that! We are proud of our Giants and we should be. So why would a locally born and bred Giants fan wear a black and gold Pittsburgh Pirates tee with #22 McCutchen on the back? Because he's the 2013 MVP, that's why.
I have worn this jersey t-shirt since I purchased it in June. It quickly became one of my favorite shirts because it is both comfortable and its unique. My quest was to find out how many comments and questions that shirt might spawn. What would people say?! It's been an interesting experience. And with the deluge of comments I got this morning at my 6:00 a.m. "hour of power" class, it's time that I broadcast some answers and share why he's a jersey worth wearing.

Question: Why Cutch?
Answer: In addition to being named the 2009 Rookie of the Year, the three-time All-Star and two-time Silver Slugger is outstanding on defense too. He holds the glove behind countless web gems and the 2012 Gold Glove award. I keep waiting for him to climb the wall to make a play in deep center in the way that Bo Jackson once did.

When I read that he played football in high school, I immediately thought "cornerback." Knowing Cutch, he probably played wide receiver as well. I don't care that he's only 5'10" —Have you seen his vertical? He was a top recruit in the state of Florida for football but opted to pursue a career in baseball. Florida is home to many great and fast athletes. The fact that he was a part of a state title-winning 4x100m relay his freshman year of high school says a lot. If you are a fan of great athletes in baseball, he's one to note.
Comment: Wow...Pirates. What's up with that team?
Answer: I love baseball. I try not to. But every year some story, some player, some experience draws me back to it. The Pirates are just another example of how and why that continues to happen.

This small market team hadn't had a winning team in 20 years. I tried to explain this reality to my 17 and 18 year old students. "We're not even talking about going to a World Series or a divisional playoff. Fans haven't even seen a winning season in what is your entire life" I cried. "Why Everyone Should Root for the Pittsburgh Pirates" captures just how bad it was.


In the course of two decades, the team lost more than a hundred games twice, and never won more than seventy-nine. Baseball seasons are long enough in the best of times. In the worst of them, when a team reveals itself to be unworthy of the playoffs by May, they are really long, hopeless affairs.

Fortunately, the 2013 season—thanks in large part to Andrew McCutchen—kept fans' eyes on the scoreboard all through the month of September.


“It’s great to go to Pittsburgh and feel the excitement in the air. And winning that eighty-second game was a palpable relief,” he wrote in an e-mail. “But I think my happiness or unhappiness is mostly predicated on more personal things, like what I’m doing for work, or my relationships with other people…. I like feeling excitement over a big win, but it’s bad to let a sport you watch affect your day-to-day mood too much. As a Pirates fan, that’s a lesson I’ve learned over twenty years. I’m thirty-three, and being a Pirates fan has, on some level, been miserable since I was in middle school. If I couldn’t compartmentalize my feelings about the Pirates, I would have spent a quarter of my life being a miserable person.”

Nothing beats feeling excited over a big win. The Buccos had a lot of them!
Question: Pittsburgh? Do you have some sort of connection to the 'burgh?
Answer: I wasn't able to travel home for Thanksgiving and Easter when I was a student at Notre Dame. My parents generously paid for my college tuition, but there were limits. Traveling was one of them. To fly home to the Bay Area only to return three weeks later was both too costly and not practical; I would spend as much time in the air as I would at home.

My freshman year, I went to my roommate's home in South Bend. I was with her for the meal only; I spent the rest of the time in Farley (my dorm) by myself. It was incredibly lonely, but I also know I'm a better person for having had that experience (still, I wouldn't wish it one anyone). That spring, a friend from crew invited me to her home in Mt. Lebanon a suburb of Pittsburgh. I loved the city—its hills, the convergence of three rivers, Pyrmanti Brothers. It surpassed any of my expectations. I returned there for those two holidays the next three years as well as to row in the Head of the Ohio.  Yay Pittsburgh! 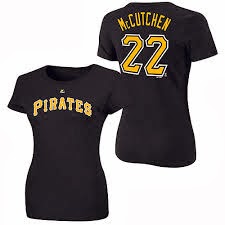 Comment: I can't wear the jersey of an athlete from another team.
Answer: I get that. I think it might be easier for a woman to get away with this than a man. This t-shirt is a woman's cut. It's perfect for working out!

But the reason I enjoy wearing it so much is also because Cutch is a devout Christian. His father is a Pastor and he's been outspoken with his faith in Fellowship of Christian Athletes. His words were both powerful and prayerful. The interview with Clay Meyer for "Sharing the Victory" gave me much to consider. I hope they inspire you.

STV: What does it mean to you to be in the zone spiritually?

AM: I feel like it means doing God’s work—doing what He’s called me to do and using the gifts and talents He’s given me. In my life, I want people to see that I’m not just a baseball player. I want them to know me as a Christian and as someone who is not afraid to make God’s name known. There are sure to be difficult times. God said it wasn’t always going to be easy, but Luke 12:48 says, “…Much will be required of everyone who has been given much. And even more will be expected of the one who has been entrusted with more.” I feel like that verse applies to me in more than just giving. It involves doing what’s right, doing what God expects me to do on and off the field. When I am doing that, I feel very connected to God.
STV: Does living in the zone spiritually translate into how you play and how you help lead your team?
AM: When I’m living in the zone spiritually it definitely helps me as a baseball player. It keeps me positive, believing in the abilities God has given me. As Luke 17:6 says, if we have faith just the size of a mustard seed, we’ll be able to do amazing things.

My dad is a pastor, and growing up he instilled Romans 8:28 in me: “We know that all things work together for the good of those who love God: those who are called according to His purpose." That applies so much to us playing for the Pirates. We’ve had 19-straight losing seasons, but I know and I believe that all things will work out for the good. That’s what keeps me positive, and that’s what keeps us going.

My colleague, one of the first to inquire about the Cutch jersey tee, was also the first to tell me my guy won the NL MVP. I was smiling and rocking all day. This social experiment yielded more joy than I expected. And the best part is that each passage of Scripture Andrew McCutchen mentions speaks to why. Congrats on a great season and a great honor #22!