Jimmy Connors: Some of What We Want....

Today at school, I wandered the halls looking for my colleagues with whom I knew I could discuss the "30 for 30: This is What They Want." My criteria? Sometimes it's their age, other times its their personality or where they grew up, but I always have a sense of who I can unpack the questions and ideas that these ESPN films raise for me. This one was no different.
I sniffed them out. I found my friends who "get" tennis. I hunted down the men and women with a good sense of humor and a thick skin for strong personalities. Why? because the subject of the latest "30 for 30" is none other than the star/villain—James Scott Connors, and he left me with more questions than answers.

"This is What They Want" is an examination of Jimmy Connors' career told through the lens of the 1991 U.S. Open, when Connors so famously played at the age of 39 past five challengers, through an epic contest with Aaron Krickstein, and all the way to the semi-finals before being stopped by Jim Courier.

But it's not just an examination of that tournament: it's a look at how Connors and the colleagues/adversaries of his heyday re-invented tennis in the first decade of the Open era to be a high-octane spectator sport for the whole country, colored by intense competitors with strong personalities and towering, well-matched talents. And it's an exploration of the way "character" players like Connors changed the game and carved out legacies through their careers on the court.

I laughed out loud several times in the first half of the program. Connors' character in this sense was positive—he had a lot of it! Not many people would revel in being known as tennis' Pete Rose. His response? "Anytime you compare me to Pete Rose—that's an honor." No one say that. But Jimmy? He meant it.
Connors is remarkably competitive, to the point that he is unapologetic about winning and how he does it. "What am I supposed to do? I could only give my blood" he cried. Despite the number of former players and writers who admit to disliking Jimmy (one even goes so far as to admit he hated him) slowly but surely I found his ways to be fairly convincing if not attractive.
He saw no point in being a gentleman. He didn't play by the antiquated rules of the blue blood sport. Born in East St. Louis, he had no reason do so. I started to think to myself, yeah, I guess you don't have to. And he didn't change in 20 years he played on the circuit

Watching his career 22 years later, I wanted to laud "him." I wanted to promote the best of the American lefty—an athlete who made every single fan in the audience believe they helped him win, a tennis player who got 20,000 fans sounding like 60,000 and a legend that had his rival question, "Did I try as hard as I could? Did I give as much as he did?" (John McEnroe)

But an unforgettable match revealed the biggest lesson that Connors can teach us: judge a man by the way he treats those to whom me owes little. "This is What They Want" reveals this lesson in the tennis player Aaron Krickstein and USTA chair umpire, David Littlefield.

Labor Day fourth-rounder -- on Connors 39th birthday -- against Aaron Krickstein. By this time, his feats were the subject of a "Nightline" feature by ABC's Ted Koppel, and the tennis community was standing at full attention. "What Jimmy has," said Ilie Nastase, "is what we would all kill for: Just one more time."

The Krickstein match now stands as a curiosity, a kaleidoscope of chaos, a Barnum & Bailey act that could not be replicated today -- and in many ways, that's a shame. Poor David Littlefield, the chair umpire, looked as if he was about to become ill under the withering barrage of Connors' rants, but he just sat there calmly, issuing no penalties, letting the show go on. By the referees' modern-day handbook, perhaps Littlefield's inaction would be viewed as inexcusable. At the time, it was crucial.

How bad did it get?

"Bullcrap!" Connors yelled at Littlefield after he'd overruled a call in Krickstein's favor during the second-set tiebreaker. "Get out of the chair. Get your ass out of the chair! You're a bum! I'm out here playing my butt off at 39 years old and you're doing that?"

At one point in the fourth set: "Kiss me before you do anything! Just kiss me!"With Krickstein serving at 4-2 in the fifth, after a Connors approach was called long on break point and Littlefield refused to overrule: "You are an abortion! Do you know that? ... Get the f***out of there!"

At this point in the program, I was no longer laughing. I've never heard a human being refer to another as an "abortion." I watched in quiet disgust and began to wonder, Would I be one of those fans that "helped him win?" I continued to watch because I wanted to see where this story would go.

I didn't remember the outcome of the 1991 US Open nor do most people (Stefan Edberg was the victor). For me, the real outcome of this tourney was what this "30 for 30" reveals: the fruit of ugly competition. It can stilt, damage and even end a relationship.
In a moment of total honesty, Krickstein says "maybe another reason I could never beat Jimmy Connors is because I never like playing my friends." He looks away from the camera for a moment and said "we were pretty close. We hung out a lot. I even shot my first gun at his ranch." He laughed as he recalled the story and then he paused. "I never heard from him in any way, shape or form after that match."

Wait..what? Every respondent in the show reacts to this truth in disbelief. Connors won! It was an epic match. What happened?

Connors said "I keep going back to the fact there was nothing personal. It was business and my business was winning. Because of that I got criticized for that too." A sportswriter chimes in and says"he'll do anything to win" to which Connors replies, "you're damn right I will. Of course I will."

You may disagree, but I believe Connors is wrong. While the match isn't personal, living with the outcome is. Both parties live with it. Sometimes our opponent is a rival, often it is a friend. This wasn't an ordinary match; it was extraordinary. Why Connors could not have reached out and said "We did this...thank you." is something I am convinced he was an is unable to do. And that's not because of what he did but how he did it. 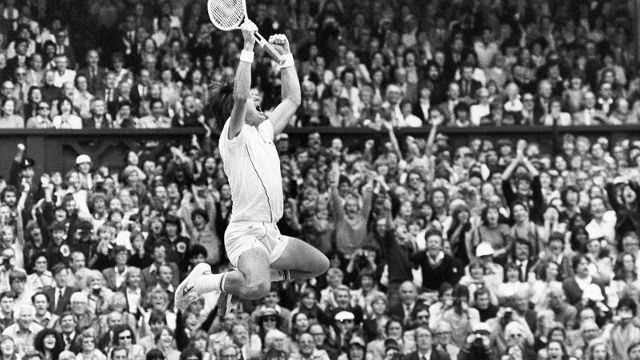 
So as you’re watching Connors stomp on another opponent’s throat, almost threaten to rip an ump out of his chair, or refuse to speak to a fellow player years later, maybe it’s worth folding all of it in, not to excuse him, not to glorify him, but to recognize that Jimmy Connors is one of the giants and an original in a game that rarely produces them. Or not. Either way, believe me. Connors doesn’t give a fuck.

The sad truth however is...I do. Of course I do.