I Look To You: Whitney Houston on Talent & Jeremy Lin on Charisms

Although the seed of truth was planted at the “Called and Gifted” workshop, it took watching Whitney Houston’s funeral for me to admit that many talents are in-born. I don’t know why I was close-minded to realizing natural talents like music, art and athletics can be inherited from our parents. Fortunately, “Called and Gifted” a program that teaches Catholics how to discover and use their unique spiritual gifts, opened my mind to another way of thinking. We all have talents and we have charisms. God gives them in abundance both naturally and supernaturally. Come Holy Spirit! 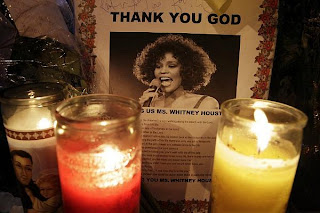 Prior to the televised memorial service I was already aware that Houston’s mother—Cissy Houston, along with cousin Dionne Warwick, godmother Darlene Love and honorary aunt Aretha Franklin were all notable figures in the gospel, rhythm and blues, pop, and soul genres. But as I watched Pastor Marvin Winans at the piano as his sister CeCe, brother BeBe and at least four other siblings sing a soulful rendition of "Tomorrow," I realized their shared gifts are more than coincidence. Our talents are gifts from God; they were poured out in the form of music in the Winans. Indeed, the evidence that talents may be passed down from one generation to the next is glaring in popular culture and close to home. I’m not sure I needed the eye to see it. Rather, I needed the mindset to understand. 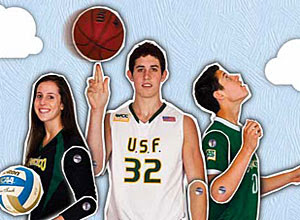 Speaking of close to home, upon reading that USF defeated Gonzaga in men’s basketball last night, I remembered the Don’s Angelo Caloiaro has an athletic family par excellance. Caloiaro's player profile reveals that "His younger brother Vinny is a sophomore midfielder on the USF soccer team and his younger sister, Joanie is a freshman setter on the Dons' volleyball squad." In case that doesn’t make a statement, perhaps that his first cousin is professional volleyball player Kerry Walsh does. And just down Palo Alto way, Andrew Luck was not the first athlete to play for the Cardinal. His older sister Mary Ellen played volleyball. They must have received some athletic talent from their father, Olie, a former Houston Oiler and West Virginia quarterback who currently serves as the athletic director at West Virginia.

In the August 1, 2011 posting "No" to Sibling Rivalry & "Yes" to Sibling Success--What Serena Williams Made Me Realize, I stood fascinated by families that met athletic success. I said “Rather than “How can it be that from the same family came x, y and z….” Isn’t the question—Why isn’t this happening more regularly?” But since writing that column, I have noticed how often it does happen. And it should, especially if natural talents are largely inherited.

So what about charisms? How might they be known or understood in the sporting world? I think the hottest subject in Sports and Spirituality, Jeremy Lin provides a great example. 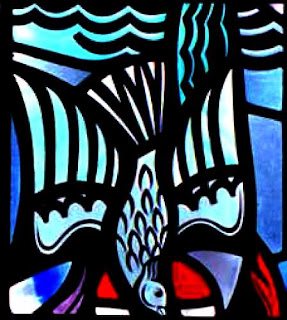 According to The Catholic Spiritual Gifts Inventory, "Charism is simply the Greek word used in the New Testament for favor or Gratuitous gift. They are special abilities given to Christians by the Holy Spirit to enable them to be powerful channels of God’s love and a redeeming presence in the world. Whether extraordinary or ordinary, charisms are to be used in charity or service to build up the Church (CCC, 2003)."

Charisms or long-term charisms need to be discovered and developed just like talents. It should not take much discernment for Knicks basketball fans to determine that their All Star point guard has the charism of Faith. 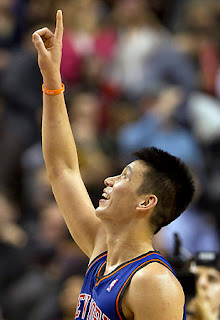 Weddell writes, "This spiritual gift enables to an effective agent of God’s purposes through an unusual trust in the love, power, and provision of God and a remarkable freedom to act on this trust."

Lin’s life has been so overrun with requests for interviews that he agreed to speak with Warriors beat writer Marcus Thompson II on one condition: questions must be limited to the issue of spirituality. The exclusive interview: Jeremy Lin says faith in God triggered ‘Lin-sanity’ reveals his charism. Thompson reports,

before he was crowned star of the Knicks, Lin was ridden with doubt and anxiety. So he doubled down on his commitment to God. And without that, he believes, there would be no Lin-sanity.

What the country sees is a Cinderella story, Lin's meteoric rise from the NBA Development League to unstoppable star. But for Lin, it's a story of faith, the beautiful struggle he's now convinced he can win. Most importantly, it's a story of how he'll be completely fine if he doesn't.

"I'm not playing to prove anything to anybody," Lin said. "That affected my game last year and my joy last year. With all the media attention, all the love from the fans (in the Bay Area), I felt I needed to prove myself. Prove that I'm not a marketing tool, I'm not a ploy to improve attendance. Prove I can play in this league. But I've surrendered that to God. I'm not in a battle with what everybody else thinks anymore."

He started every morning with a devotional before heading to the gym to work out. Whenever the anxiety tried to creep in, he whispered a Bible verse to himself: And we know that in all things, God works for the good of those who love Him, who have been called according to his purpose. — Romans 8:28

Even with the glittery trappings that can accompany an NBA lifestyle, Lin's devoutness has always been his compass, friends say. "In high school, a few of us were known to party on Friday nights after the games. Jeremy was known for teaching the bible to kids and spending time with his family," said his Palo Alto High teammate Brad Lehman. "None of the usual distractions were an issue for him."

Every Christian has a vocation or “mission” in life, a work of love through which each individual is called to follow Jesus and for which they were created (Ephesians 4: 7-16). God may have made Lin to be a basketball player. His background provides little to no evidence that his talent is inherited. His father taught his two brothers and him a game he never played at the YMCA. I have no idea if his father had an opportunity to play hoops in Taiwan or not. Let’s be clear, talents need not be inherited, but it seems obvious to me this talent may have been created as a platform by which his charism of faith is now magnified. 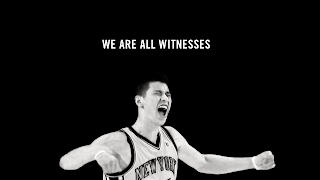 And in some way, Lin is no different than the late Whitney Houston. Her talent was clearly music but so too was her charism. This charism "empowers a Christian to be a channel of God’s creative goodness to others through writing or performing music for the delight of others and the praise of God." It is unfortunate that her talent and charism lost to addiction. But death and tragedy did not have the last world. As the Newark Star Ledger reports: "As world-renowned singers, family members and friends testified to the star's unshakable faith, the service grounded Houston's life and music firmly in the gospel tradition."

"I Look To You" Whitney Houston and Jeremy Lin and I see the greatness of God in your gifts.

Photo Credits
Thank You God
Holy Spirit
Caloiaro Family
We Are All Witnesses-Lin
Posted by Anne Stricherz at 9:34 AM