Despite the weak economy, I was not surprised to see that every home game this season of the World Series champion San Francisco Giants has sold out. This week, the Giants, who rank third in overall attendance, welcome the team with the worst attendance in Major League baseball—the Florida Marlins. For stats junkies, facts like these and more can me found on the ESPN Major League Baseball report. 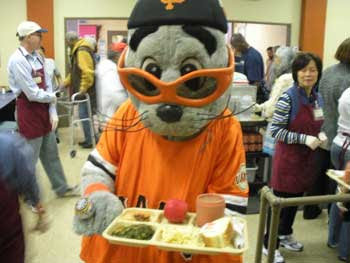 But MLB isn’t the only organization keeping good records. Across town, St. Anthony’s Dining Room has been keeping count, by hand tally for 60 years of every guest who has walked through its door for a warm, hot meal and their consummate hospitality.

On April 12, 2011 St. Anthony’s served its 37 millionth meal since it began doling out food on the Feast of St. Francis of Assisi-- October 4, 1950. On hand to serve meals that day--beside a core army of volunteers--was San Francisco Giants, pitcher Barry Zito. St. Anthony’s website reported that A ‘momentary pause’ in the usual service was made to honor the significant moment with the Giants’ player, celebrating a ‘giant’ contribution to the community. 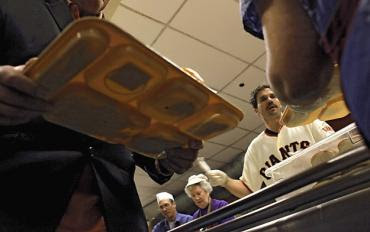 A statistic like “37 million meals served” should be news in and of itself. It’s a sad but impressive fact. And I hate to admit it, but the reason I read the article St. Anthony's milestone: 37 millionth meal by Heather Knight is because I saw a photograph of Barry Zito next to the headline. Part of me wishes that he had not been part of the story, but St. Anthony’s can and will take all the good press it can get. With the mission "to feed, heal, shelter, clothe, lift the spirits of those in need, and create a society in which all persons flourish," St. Anthony Foundation is supported entirely through the generosity of the community; they do not accept government funds. That's correct, Fr. Alfred Boedekker, OFM did not want any financial assistance from the local, state or federal government. Their doors have remained open because of donations of people like you and me.

And every year, the goal of St. Anthony’s is to close its doors. In an ideal world, they would not need to serve anyone; no one would go hungry. The reality however is different. Knight reports, "It will probably hit meal No. 38 million much faster than it would like. Since January alone, the dining room at the corner of Golden Gate Avenue and Jones Street has seen a 10% rise in the number of people seeking food, and more than 3,000 now form a line snaking down the block every morning. For many of them, it's the only food they'll eat all day." 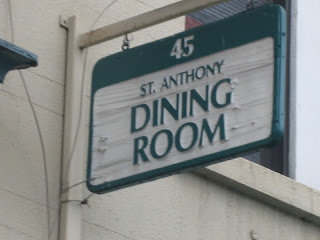 While the line or cue may be the face that many San Franciscans first see of St. Anthony’s, the dining room is the entry point for all that the foundation provides—Food to Clothing, a Social Work Center, a tech lab for job searches, a free clinic and more. "And so St. Anthony's is moving forward with a plan for a new 10-story building featuring a remade dining room, a free clothing shop and a center for social work. The top eight floors will house 90 units for low-income seniors, which will be run by Mercy Housing. Construction is set to begin in July 2012, with the building due to open in 2014 (Knight)."

Looking at the architectural designs earlier this evening, I could not help but think of another architectural masterpiece—AT&T Park. I thought of how this cathedral of baseball has transformed the China Basin neighborhood, how it is a source of pride of so many people in San Francisco and how what takes place inside, buoys the spirits of people of every age, race and creed on a regular basis. 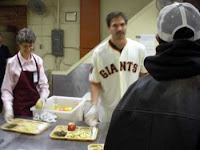 It’s safe to say that St. Anthony’s dining room does just that on a much deeper level. As a Catholic it is a source of pride for me. I believe in a faith that does justice. Because of its belief in the inherent dignity of each human person, St. Anthony's buoys the spirits of all guests whether they come for a hot meal or for rehab. St. Anthony’s both the old and the new has transformed the Tenderloin; a neighborhood where human need is great. Please consider giving tor volunteering at St. Anthony's. If you do, you make witness was Zito said, "They're all very grateful and really good-spirited people. I think they are Giants fans, too." And why wouldn't they be...?!
Posted by Anne Stricherz at 9:49 PM