Desire can show itself as aching pain or delicious hope. Spirituality is ultimately about what we do with that desire. What we do with our longings, both in terms of handling the pain and the hope they bring us, that is our spirituality. –Ronald Rohlheiser, “The Holy Longing”

I never thought standing outside of a locker room after the Notre Dame vs. Stanford football game on Saturday, November 27, 2009 would prove to be a spiritual experience. Two talented teams, two respectable programs, two dramatic season records and this night marked their one final game of the regular season. 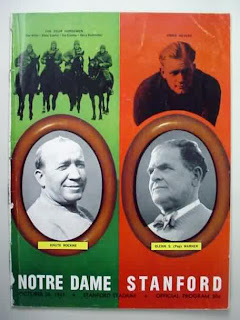 As I waited with three other alums to present the “Legends” trophy—a beautiful Waterford crystal bowl that stands atop of a redwood base recognizing the heritage of both schools—aching pain and delicious hope looked me in the eye. The lights from the field cast a surreal glow in the space outside the stadium where we stood, providing me with an interesting vantage point. Not one player or coach emerged through the tunnel without the look of either unmet longing or fulfilled desire. In that moment, I came to understand the very essence of spirituality was unfolding around me.

Aching pain
Questions loomed large about the future of Coach Charlie Weis; this loss nearly sealed his impending fate. Losing a game in the final two minutes hurts, but losing a head coach may hurt more.

The buy-out of Weis’ ten year contact, the loss of a potential recruiting class who had wanted to play for him, the process of firing any person—albeit “one of our own,” exacerbated the aching pain.

I watched the Notre Dame trainers and managers pack up and roll out the massive operation that is college football. Already a serious and important task, they worked quickly and quietly. A smile was nowhere to be found. This was most readily apparent on the face of this team,

Notre Dame Quarterback Jimmy Clausen, who was accompanied off the field by Athletic Director Jack Swarbrick. I wondered if Swarbrick kept his arm around Jimmy to protect him from another irate fan or if he was begging him to reconsider leaving early for the NFL draft. Clausen left Swarbrick’s head-lock to embrace a football trainer in a hug said that—“I’m sorry” and “this stinks.” On the final play of many games, Clausen alone led his team to victory. His face revealed a tangible disappointment that this game and his career at Notre Dame did not end in this fashion.

When I caught the strong profile of graduate assistant and former Notre Dame All-American Bryant Young, the words that he said at the “Legends Weekend” lunch just the day before haunted me: it’s not how you start the season, but how you end it. Every member of that team wished the season had ended differently—the Irish were 0-4 in November. If spirituality is about what we do with that desire, I concede, it went to the right team.

Delicious Hope
The Stanford Cardinal had much to celebrate. Just one week prior, their arch rival--the Cal Bears won the “Big Game” at Stanford. This was a team that had surpassed expectations all season long; it was obvious they were unwilling to lose again. The “Fighting Harbuaghs” had something to prove and completing this season at home with a win was the only option.

Players became increasingly vocal with their cheers and whistles as they began to fill the locker room. Even Condelezza Rice, honorary game captain, couldn’t curb her enthusiasm.

Before she addressed the winning team and coach with her congratulations, she stopped to shake our hands and acknowledge what an exciting game it was. Rice holds a master’s degree in political science from Notre Dame and speaks candidly of her support for the Irish. But on this evening the former Secretary of State, now a professor at Stanford’s Hoover Institute, was anxious to celebrate with the victors.

The presentation of the trophy could not begin without the man who made this triumph possible. Delicious hope was most palpable in running back Toby Gerhart, and his Heisman trophy run. That award would be determined in two weeks time. On this evening however, visions of the Heisman danced in the heads of every Gerhart fan.

And when at long last Coach Harbaugh was freed from the media circus on the field, we asked him when would be the best time to present the Legends trophy. Harbaugh took one look at it “Let’s do it now.” My male cohorts followed him inside the locker room to honor the winners. The boisterous crowd gathered close as they listened to a Stanford coach share the history and significance of the trophy. Everyone then bowed their heads as they said the “Lord’s Prayer” together. It doesn't get much more spiritual than that. 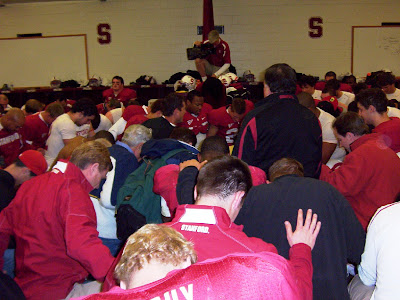 The Essence of Spirituality
Spirituality is largely open to interpretation; it can be tough to define. If Rohlheiser is right, if what shapes our actions is our spirituality, then the Irish need to work through the aching pain and move past the regret and disappointment of the 2009 season. Delicious hope waits and so too does the “Legends Trophy.”

Football players, coaches and fans all long for a storied season like Stanford's. Despite the aching pain, delicious hope is what keeps us returning one year after another. So too may an unexpected spiritual experience that the game provides.