Super Bowl LVI between the Los Angeles Rams and Cincinnati Bengals offers our society a case study in increasing numbers. For example, with an estimated total of S101.1 million people watching the game, viewership was up 6%. While the most-watched Super Bowl ever remains the 2015 game between the Patriots and Seahawks, which had 114.4 million viewers, ESPN reports "the ratings improvement for what is traditionally the most-watched event of the year was no surprise." A sense -- or hope -- that the coronavirus pandemic may be winding down gave license for more homes to resume Super Bowl parties and gatherings. Food and drink—from beers and brats to chips and dips were consumed before during and after the game. It's true, other than Thanksgiving Day, Americans eat more on Super Bowl Sunday than any other day of the year. And yet, this truth also reveals another number: we have more people that go hungry than ever. This might be the most important lesson of "Faith and Football." 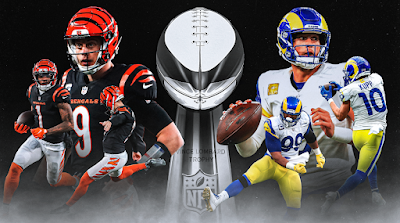 Faith and Football is an assignment in my Sports and Spirituality course. It offers seniors an opportunity to not only research the faith lives of certain athletes, but to examine What—if anything—is the religious and spiritual significance to the experience of playing football or being a fan?

I divide the class into two, and each group investigates the coaches, players, communities, their foundations, cities and unique attributes of the AFC and NFC Championship teams. Class begins with a prayer, followed by a coin toss. The winning team decides if they want to present or punt. Two of the varsity football coaches were in attendance for this special class. I loved their questions and seeing the dynamic between player and coach off the field.

At the conclusion of the presentation and with each "team" owning their own predictions of the game, we share Super Bowl snacks. Though I have yet to see healthy, organic foods color our spread, it's fun to see what students are willing to share. They are also asked to provide a donation for a local food bank. 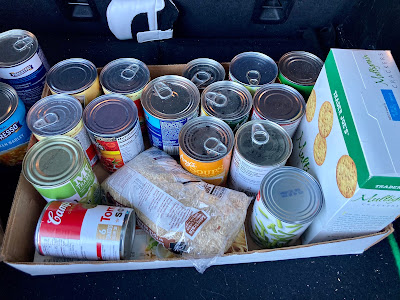 They didn't forget! I was happy to drop off a palate of canned goods at the San Francisco-Marin food bank, an easy stop on my way home from school. As I pulled up, I noticed the parking lot I once used was now a construction zone for the expansion of the warehouse.

I have always thought the SF-Marin Food Bank to be an impressive structure. It has good lighting, great ventilation and it is clean and hospitable. The added space looked equally impressive. Usually, I find growth that looks like this to be a positive, but when I considered the reason behind this addition, I couldn't help but think otherwise.

When the San Francisco-Marin Food Bank started planning its $40 million warehouse expansion five years ago, the idea was to put the organization on pace to meet demand expected to grow gradually over the next two decades.

Then came the pandemic. Layoffs and furloughs skyrocketed, increasing the number of households turning to the food bank for help by more than 70%, from 32,000 to about 55,000. Traffic to the “find food” page on the food bank’s website is four times what it was before the pandemic.

Suddenly the expanded warehouse was no longer about planning for 2040. It was about getting groceries to families right now.

Their website reminds us "The Food Bank is a lifeline for many. As the pandemic raged, food insecurity increased. Facing challenges, we have pushed our warehouse to its limit. Built to distribute 30 million pounds of food annually, this year we will distribute 75 million. That is why we’re expanding."

On Super Bowl Monday, I asked my students their impression of the game, the half time show, and what they enjoyed about Super Bowl Sunday in light of our project. Class began with a prayer for those who go hungry. I asked the class how they feel about the expansion of the Food Bank. Should I not feel sad that this is a necessary good? I invited them to imagine a world where food banks were closing. What if they closed their doors—not because of limited resources but because no one was in need of their services? 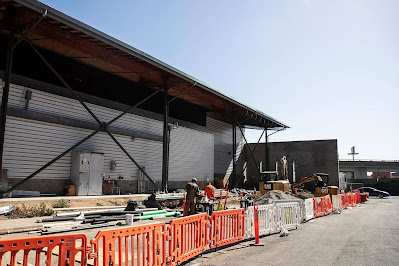 Many Americans cheered for the Cincinnati Bengals because they found their journey to be a Cinderella story. What if the contraction of food banks and soup kitchens wasn't a fairy tale, but our next victory.

Congratulations to the Los Angeles Rams and thank you to SF-Marin Food Bank for feeding those who go hungry.