Justin Turner, Apologies and the World We Live in

I played golf with a ginger yesterday. Some of you will know exactly what that means. This red headed, red bearded athlete hit the ball incredibly far and fast off the tee. About three holes in to the round I erroneously called him Justin. His name was Wade. "Justin? he said. "Who's Justin." I apologized. I was hoping he would take it as a compliment, but given what happened after the World Series, I wasn't sure that he would. 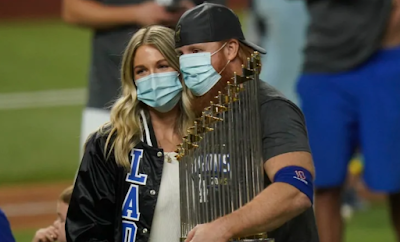 Justin Turner is the All-Star third baseman for the Los Angeles Dodgers. He tested positive for COVID-19 and was removed during the eighth inning of Game 6. Less than an hour later, his team captured the World Series title.

As the best team in baseball celebrated on the field—hugging, high fiving, screaming and a few men crying, a new and nearly unbelievable story unfolded. Turner reemerged to take a photo with his wife (who was removed from the players' family section to join him in the isolation room). He joined the team for the championship and the next news-bite you will see is a photo of Turner sitting next to the Dodgers' manager, Dave Roberts—smiling, masks down. The media was quick to report that Roberts is a cancer survivor.

On November 6, 2020 Justin Turner shared via Twitter a public apology what happened on October 27, 2020 following the World Series Championship. While some might question why it took the man—who is regarded as the spiritual leader of the team—over a week to express his regret, it is clear that an investigation by MLB was part of the process. At face value, Tuner's actions appear incredibly selfish and disrespectful of the times we are living in. Upon further investigation another story emerges. I will let both his apology—posted on Twitter and through his personal website— and the happenstance around the offense speak for itself. 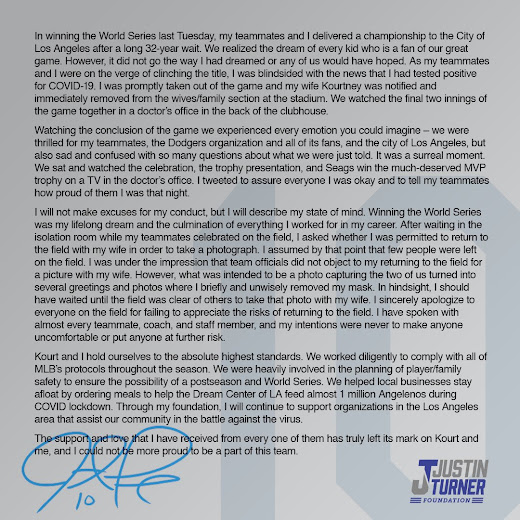 It was incredibly liberating to have some emotional distance from this COVID disaster. I am not a Dodger fan in the least. In fact, during the World Series, I was actively rooting against them and for the Tampa Bay Rays. I feel no personal need to defend Justin Turner whatsoever.To me, he let his team and his fans down. I wondered if and how baseball would punish him. He will not be fined by MLB, Los Angeles has its trophy and fortunately no one on his team tested positive for COVID-19 following the win (five people in the Dodgers' organization did test positive but they were outside of the bubble).

I read his apology. I think it is important that he wrote one for his fans, his teammates and for baseball. I have also read how many people have completely rejected it. People are tired of leaders making mistakes. The public has asked for more of us and of one another in the midst of pandemic. I do not disagree.

In recent times however, I have noticed just how many apologies are criticized and go unaccepted. I hear it among friends and acquaintances as they harbor anger and antimony long after an offense has occurred. I wonder, Is this the culture of social media? Is this just the time we are living in? I ask these questions because I am concerned. Do we want a society that accepts some apologies and rejects others? And for those who do not accept apologies, I would like to know—what do they want? I imagine the answer is for someone to NOT make the mistake yes.....but I would like to hear more.

You might argue it's a person's right to accept or reject an apology. Fine. My question remains. Where does that leave us? Both the offender and the offended? And on another level, I now wonder, Is it important to say I am sorry? Is owning up to mistakes important? Because an apology isn't a given. It's not necessarily required—is it?!. As I've said more than once, And for what else shall we pray? 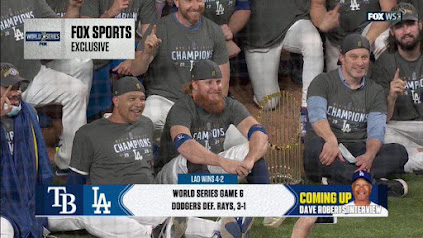 COVID-19 has shed a lot of light on inequalities, injustice and more. The pandemic has challenged us to confront matters of life and death, the quality of life for, most especially the least among us in our society. To play a baseball game in the middle of it all, has not gone unquestioned. While it has brought excitement and joy, it has also brought disappointment and further division. However, through MLB, I've been able to see that a world that rejects people owning up to mistakes, and dismisses those who account for their failings is not one I want to live in—before, during or after a pandemic. Aiming to explain what happened and why, knowing you should have done better, and reaching out personally to those you have harmed—well, that's one I do. I won't apologize for that.

Posted by Anne Stricherz at 7:33 PM