While I do love a good "Letter to the Editor" very seldom do I read the editor's letter in any magazine. It's all too easy for me to pass up. However, Matt Malone, SJ the editor of America had me at hello...or rather kept my attention as he spoke to life in prolonged quarantine. He wrote

The world is an awfully tough place to call home right now. In addition to the economic and public health crises, there is the general desolation that pervades the public discourse. Every time we turn on the television, there is one group of people, who believe the world is ending, yelling at another group of people, who believe that it’s just beginning.

But both groups of people have something in common: They are joyless. There is a serious joy deficit in both the church and the world these days. Some of the most visible Christians, for example, look as if they haven’t had a joyful thought in 10 years. That’s a big problem, for them certainly, but also because joy is what makes our witness truly credible, what changes the mode of the giver and the receiver. Joy is what makes our faith attractive, even what makes it intelligible. Without joy, to paraphrase St.Paul, we are just clanging cymbals.

And this, my friends is precisely the difference between the five-part 30 for 30 docu-series: "The Last Dance" and the two part 30 for 30: "Lance." 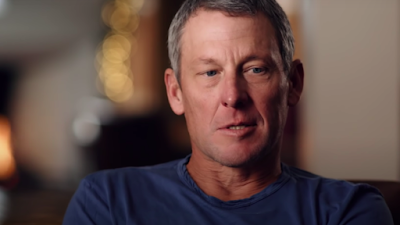 What I found so compelling about "The Last Dance" and why it captured the attention of so many sports fans and those who aren't is because of joy. Joy cannot be faked. It is not a virtue that is "on demand." To me, it is even elusive in that one can be going through hardship and grief, loss and frustration and STILL find joy! Steve Kerr has claimed joy as essential to his coaching philosophy with the Warriors. "The Last Dance" shows from whence that came.

To watch the three hour program on Lance isn't devoid of joy, but I challenge you to find much of it.

The work of film maker Marina Zenovich, the first episode chronicles the rise of Lance Armstrong and the second shows the fall. In an interview with Mina Kimes on ESPN Sports Daily, Zenovich admits "The fall is much harder." 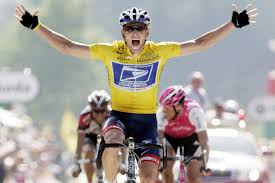 People are quick to draw comparisons between Michael Jordan and Lance Armstrong—two of the all time greatest athletes in their respective sports. Though there are similarities, I find that claim to be very limited and over-simplified. However, one similarity worth noting is that both men had creative license over their films. Neither one of them had a single interview or respondent eliminated. Both directors emphatically verified this as true.

To me, this is important because the primary question of myself I asked while watching "Lance" was Is he telling the truth? For example, the opening story is simply fantastic. I love the way Zenovich cut up the dialogue with introductory credits. She strings the viewer along, only to have this dramatic incident, rife with yelling and shouting obscenities end in a way totally unexpected. I shared this story with a friend from Texas. He didn't laugh, he didn't smile. I looked at him totally confused. He immediately responded, "that story has been told so many times and not once has it ever been verified as true. It is a complete urban legend. No one can confirm who, where or when it happened." I wanted to retort and then I recalled my primary question: Is he telling the truth?
I struggle with those who conflate honesty with "my truth." In Episode One, he vows "I will tell my truth....my truth as I remember it."  Given that he withheld the truth—his truth/your truth/my truth/.any truth for years—I don't know why I should believe him now. Zenovich asked him, "When you were lying, what was it like looking at yourself in the mirror?" He immediately responded  "No problem. It was no problem. I’m not denying it or defending it, but I’m telling you it was not problem. I was so used to it.  You become so immune to it." I'm considering showing this scene in class for it presents a conscience qualm. What else should we call it? Lance is being honest about his dishonesty.

Some have asked if this program reveals anything new about Armstrong. Why does it need to be told? I suppose because of the tension we can so readily see in Lance is one we most likely have to reconcile in ourselves, too.

Lance says, "Nobody dopes and is honest. You’re not. The only way you can dope and be honest is if nobody ever asks you, which is not realistic. The second somebody asks you? You lie." When I heard that confession, I said "I believe that's true." Minutes later he adds "I could never be honest about this because all this momentum, profitability and goodness would come crashing down." I said "that might be true, but it's not."

The dance of telling the truth/not telling the truth, living the truth/not living the truth in Armstrong is hard to see. For example, after Lance speaks to the Rice University football team where his eldest son Luke (who wears #35, not #48) plays, Zenovich asks "What would you say to your son if he wanted to use PEDs?" he says, "Not now. Not at this level. No. If it’s the NFL that’s another thing, but not now." Perhaps Armstrong is unaware that PEDs are unsanctioned in the NFL. Players are tested regularly, fined and punished for violations, too.

I have often thought that the more I read and learn about great athletes, the more sympathetic I become toward them and their cause. I generally find the good and want to believe in them. However, Lance Armstrong challenges my concern. 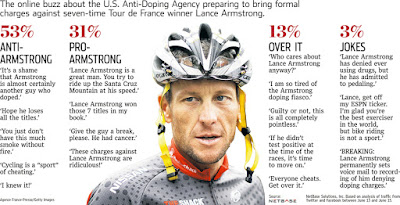 One cyclist says  "there are good people who do bad things and bad people who do good things." I agree. His work with the LIVESTRONG foundation and how he spoke openly about testicular cancer—a disease most men were unwilling to address is legion. One respondent said" I truly believe if you are diagnosed with cancer today, your experience is better than it was pre-Lance and pre-Livestrong. Irrefutably better." Thank you Lance.

American cyclist Bobby Julich said, "thirty years of knowing a person, you either love them or hate them. I still can’t decide." The missed opportunities, the selfishness, the lack of respect for teammates, the moratorium on one of the greatest comebacks stories of all time—seven Tour de France trophies in tow—is why "joyful" is not a word I can use to describe this program.

At the beginning of Episode Two, Zenovich uses the same director's cut. She asks,


"Do you feel like you want to be relevant again?"  to which he responds "This is going to sound terrible but I am relevant."

I narrowed my eyes.I asked myself how that is true. Seems like a fitting question....Joy is always relevant. Lying is not. 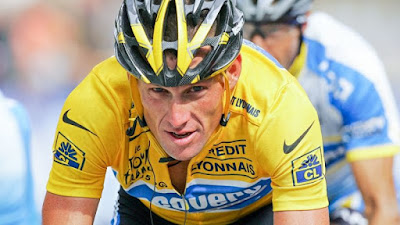 Email ThisBlogThis!Share to TwitterShare to FacebookShare to Pinterest
Labels: 30 for 30, ESPN 30 for 30, Lance Armstrong