The Way Back: A Catholic and Not Catholic Film

The Way Back starring Ben Affleck is a both a Catholic movie and it is not. You might wonder how both can be true. Theologian Richard McBrien emphasizes that Catholic spirituality is “both/and” not “either/or.” This both/and proposition is what makes "The Way Back" worth seeing in the theater and discussing further. 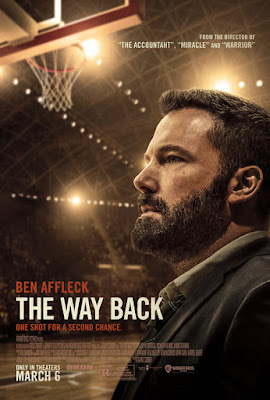 I am always hesitant to refer to a film as a "Catholic movie." When I read that description or hear someone say that, I want to ask What do you mean? Forgive my rhetorical question. On one hand, I know what that means. And on the other, I want clarity. Why? To label any creative project, painting, piece of art, or production as "Catholic" leaves a door wide open. Is it sacramental? Is it culturally Catholic? Is it lower case "c" catholic or proper noun Catholic? Does that descriptor bring the faithful in? Turn others away? As James Joyce wrote in “Finnegans Wake:” “Catholic means ‘Here comes everybody'.” That description gets us nowhere...or everywhere. So what to do? Explain how, tell me why. I'm listening.

Here are my two cents:
"The Way Back" offers a fair portrait of the culture in a Catholic parish with a Catholic school. The parish priest has known Jack Cunningham for most of his life. He knows his family members by name and presided over his father's funeral. Jack shows proper respect for the pastor in a way that those who have been raised in a community like this can and should do. I always remind my students Catholic is the adjective, Christian is the noun—Catholicism emphasizes the experience with God is with and through other people in a way that other Christian traditions do not. Community is paramount. 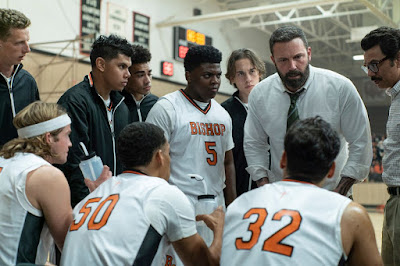 Jack, the former two-time MVP basketball star is asked to take over the boys' varsity basketball program. The halls and on the walls of Bishop Hayes High School are riddled with signs and sacramentals, banners and trophies of bygone era—but most noticeably from 25 years prior, when he played ball. The team's opponents have explicitly Catholic names: St. John the Baptist, Memorial Catholic, Redemptorist and others that color our parochial communities. The viewer has a sense that Bishop Hayes like so many Catholic schools once had a glorious and robust past and today stands on the verge of closing. Good people who give a lot are why their doors stay open. For the young men on the team and for Jack it is a grace that it is.

What I find most beautiful and compelling about "The Way Back" as a Catholic isn't the culture with which I am already familiar. No, the Catholic imagination and vision and how it is portrayed with worth reflection. For example, Jack arrives at the rectory and doesn't know when he has been summoned by the pastor. He sits down waiting and the screen shows what looks to be the screen on a confessional. In time, we find it is simply a window that let us see into the room. One can't help but wonder if there will in fact be some sort of confession from Jack in meeting with the priest. Instead, I have to think this encounter was foreshadowing a necessary reconciliation in Jack's life. I believe we need the sacraments—both capital and lower case "s." 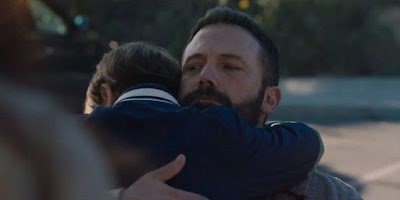 I found real beauty in the industrial setting of the film. The cinematography spans over the cranes of Long Beach and the shores of San Pedro. We often see Jack, who works as a foreman welding, or sitting solo on a project with a marine layer coloring the sky. I appreciate the quiet and the expanse of this space where Jack checks in and out, often drinking and getting by. But there is nothing that speaks to what it means to be Catholic or a Catholic film in this space.

Furthermore, Jack's necessary recovery from alcoholism and his overwhelming grief does cannot be attributed to the Catholic faith, prayers of the community or leaders in the Church. Fortunately, he has unconditional love from his mom and sister and even his wife. His team grows to care for their coach, but that relationship was comprised and severed because of his usage. One has to wonder if he can make it. There by the grace of God....

There are many lines in this movie that speak to something other than faith. Jack and his estranged wife visit the grave of their son Michael, who died of a brain tumor. His battle against pediatric cancer was long, painful and unfair. In their grief, Jack says "I cannot believe he is in a better place. That place is with you and me." It was hard to hear such brutal honesty but I believe that line needed to be said. Faith is not meant to be an escape from reality. Faith ought not serve as a rationalization in the deepest of loss. Faith should however, offer a crack in the window of hope. That maybe there is a something more, something awaiting, something new never in spite of the loss but WITH it. The viewer is waiting for Jack to rediscover, reconnect or draw upon any faith he once had. That is not his particular story....and that's ok for me as a Catholic. Why? I think God can carry that burden. 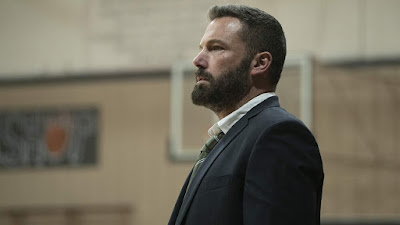 As a sports fan and a Catholic, I entered into "The Way Back" expecting all the feel good sports-movie-tropes a film can muster. I sat in my recliner seat ready for themes of redemption, guts and glory...the kind that can only be found on the hardwood. I was met with much more. My vision was stretched as I noticed what was Catholic and navigated through what was not. The combination made for a powerful story and experience. Coupled with the fact that Ben Affleck has been through the rehab that his character must do, I also wondered if he was acting. Here by God's grace, he is once again. And that's a good thing.

Posted by Anne Stricherz at 9:31 PM

Email ThisBlogThis!Share to TwitterShare to FacebookShare to Pinterest
Labels: basketball, Ben Affleck, The Way Back