The Spirituality of Shoe Dog: A Memoir by the Creator of Nike

My athletic director reminded me that parents must model for their children how they want them to be. For example, your son or daughter will learn how to handle stress based on how you, the parent react to it. Or, if you want to encourage your child to read and develop a life long love of reading, parents—you need to read.

While the "Four Gift Christmas Challenge" points to gifting "Something to read," parents—ask your child to give you the gift of a great book. Here's my recommendation, and my guess is if you're reading a blog about Sports and Spirituality, I won't be the first person to have suggested it to you. 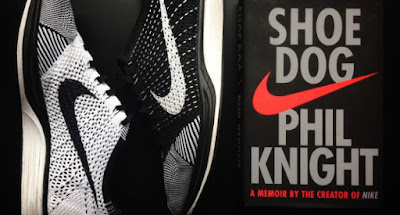 Shoe Dog is the memoir Nike founder and board chairman Phil Knight. Released in 2016, "Shoe Dog“


offers a rare and revealing look at the notoriously media-shy man behind the swoosh” (Booklist, starred review), illuminating his company’s early days as an intrepid start-up and its evolution into one of the world’s most iconic, game-changing, and profitable brands.

I enjoyed it more than I anticipated. One friend, who attended the University of Oregon asked me why he didn't read it upon publication. "I think I would have taken my life in a different direction," he said. Another friend told me he has given at least four copies of the book to different people.

Whether or not you get something to read this Christmas, no matter if you decide to read, listen or download Shoe Dog to your Kindle, there are nuggets of wisdom too good NOT to pass along. I have provided a theme for the insight—Sports and Spirituality style. ENJOY

The Power of....BELIEF.
So why was selling shoes so different? Because, I realized, it wasn't selling. I believed in running. I believed that if people got out and ran a few miles every day, the world would be a better place, and I believed these shoes were better to run in. People, sending my belief, wanted some of that belief for themselves.


Belief, I decided. Belief is irresistible.

Tuck this life lesson away:
There are many ways down Mount Fuji, according to my guidebook, but only one-way up. Life lesson in that, I thought. 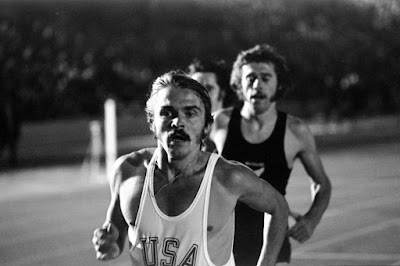 The Power of Passion: Do not forget this. Do not forget.
For eleven laps they ran a half stride apart. With the crowd now roaring, frothing, shrieking, the two men entered the final lap. It felt like a boxing match. It felt like a joust. It felt like a bullfight, and we were down to that moment of truth—death hanging in the air. Pre reached down, found another level—we saw him do it. He opened up a yard lead, then two, then five. We saw Young grimacing and we knew that could not, would not, catch Pre. I told myself, Don't forget this. Do not forget. I told myself there was much to be learned from such a display of passion, whether you were running a mile or a company.

As they crossed the tape, we all looked up at the clock and that both men had broken the American record. Pre had broken it by a shade more. But he wasn't done. He spotted someone waving a "STOP PRE" T-shirt and he went over and snatched it and whipped it in circles above his head, like a scalp. What followed was one of the greatest ovations I've ever heard, and I've spent my life in stadiums.

I'd never witnessed anything quite like that race. And yet I didn't just witness it. I took part in it. Days later I felt sore in my hams and quads. This, I decided, this is what sports are, what they can do. Like books, sports give people a sense of having lived other lives, of taking part in other people's victories. And defeats. When sports are at their best, the spirit of the fan merges with the spirit of the athlete, and in that convergences, in that transference, is the oneness that the mystics talk about.

Remembering Steve Prefontaine
"A race is a work of art, that people can look at and be affected in as many ways as they're capable of understanding." —Pre 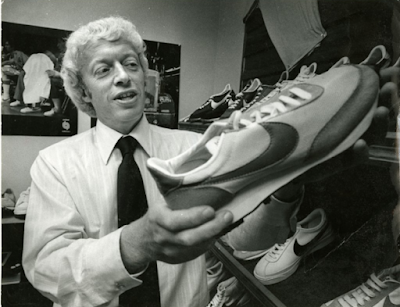 Arete—Excellence in Mind, Body and Spirit
But that day to day business of the human body isn’t our mission as human beings. It is a basic process that enables our higher aims, and life always strives to transcend the basic process of living—and at some point in the late 1970s, I did, too. I redefined winning, expanding it beyond my original definition of not losing, of merely staying alive. That was no longer enough to sustain me or my company. We wanted, as all great businesses do, to create, to contribute, and we dared to say so aloud. When you make something, when you add some new thing or service to the lives of strangers, making them happier, or healthier, or safer, or better, and when you do it all crisply and efficiently, smartly, the way everything should be done but so seldom is—you're participating more fully in the whole grand human drama. More than simply alive, you're helping others to live more fully, and if that's business, all right, call me a businessman. Maybe it will grow on me.

The Lord is the Master Architect
I say by pure chance, but is it really? Am I allowed to think that some coincidences are more than coincidental? Can I be forgiven for thinking, or hoping, that the universe or some guiding daemon, has been nudging me, whispering to me? Or else just playing with me? Can it really be nothing but a fluke of geography that the oldest shoes ever discovered are a pair of 9,000 year old sandals...salvaged fro ma cave in Oregon? Is there nothing to the fact that the sandals were discovered in 1938, the year I was born? 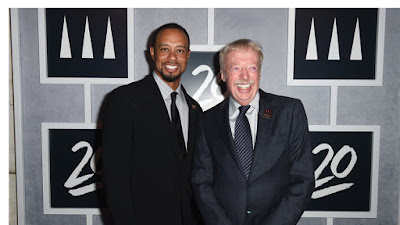 What's its all been about: The Extraordinary Tiger Woods
Part of Nike's tremendous success in the 1990s their sponsorship of the right athlete at the right time. Tiger Woods a game changer for the game of golf and the success of Nike. Knight professes unabashed love and devotion for Tiger because he called him as soon as he learned that his son died. This excerpt reveals to me, their relationship was never ordinary; I find this gesture extraordinary. Knight shares the story here.

"When I first signed with you," he says, "I didn't know all that much about the history of Nike. So, I've been studying up and I learned Oh! you're the founder."
"Well, the cofounder. yes. its surprises a lot of people."
"And Nike was born in 1972," said Tiger.
"Well, born? Yes, I suppose," I admitted.

"Right. So I went to my jeweler and had them find a Rolex watch from 1972."
He hands me the watch. It's engraved with Thanks for taking a chance on me.
As usual, I say nothing. I don't know what to say.
It wasn't much of a chance. He was pretty close to a sure thing. But taking a chance on people—HE'S right. You could argue that what's its all been about.

I think "Shoe Dog" might fall into the Want/Need/Read category. As for something to wear: easy! Nike.

Posted by Anne Stricherz at 9:14 PM