Fabled Five Words in Sports: I've Never Seen That Before

As a loyal sports fan, I have come to realize one of my favorite things to say or hear is five words: "I've never seen that before." Yes, we give our time and spend (sometimes inordinate amounts of) money to see our favorite team win. Victory is just so satisfying, but those fabled five words are too. And I was able to say them Friday, January 12 as the St. Ignatius varsity boys' basketball team beat the Serra Padres, 70-61. 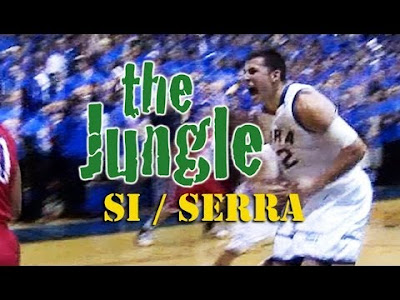 I've never seen the Wildcats defeat the Padres in their house. Known to the San Francisco Bay Area as "The Jungle Game," this contest lives up to its hype. In the past 14 years I have taught at SI, I have attended 13 Jungle Games, and I had never seen a win for the Red and Blue. The one year I did not attend, the Wildcats' got the "W." So, to see this team come back from a 9-point deficit in the third quarter was satisfying and sweet. My new record: 1 for 14. Things are looking up.

With about 20 seconds remaining in the game, and the Cats up by 8, both the players and the fans realized what was about to happen. The pressure was finally off. Those on the courts kept their composure and their focus, while the SI players and coaches on the sidelines smiled and breathed deeply. The student sections yelled cheers and jeers from one side of the gym to the other. I made a point to open my eyes and take it all in. Why? it's not often you see something you've never seen before.

One of the first things that caught my attention was the student section anxious and eager to storm the court. Limited to standing room only seats, they were chomping at the bit; everyone could feel their restless energy. We all knew where they wanted to go. The words of Ron Rolheiser were being revealed before my own eyes. In "What is Spirituality?" he writes,


Sigmund Freud, for example, talks about a fire without a focus that burns at the center of our lives and pushes us out in a relentless and unquenchable pursuit of pleasure. For Freud, everyone is hopelessly overcharged for life. Karl Jung talks about deep, unalterable, archetypal energies, which structure our very souls and imperialistically demand our every attention. Energy, Jung warns, is not friendly. Every time we are too restless to sleep at night we understand something of what he is saying. Doris Lessing speaks of a certain voltage within us, a thousand volts of energy for love, sex, hatred, art, politics. 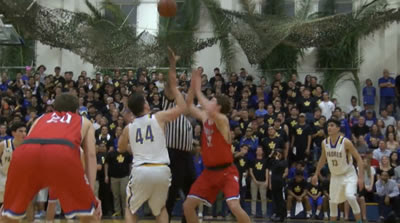 Indeed, a thousand volts of joy—of satisfaction on steroids—confined by close quarters was ready to crowd the gym floor.

I have written about this issue many times in the past; people both agree and disagree with me. I knew that our deans' were emphatic about not taking the hardwood until both teams met in the post-game ritual: lining up, shaking hands and in some cases extending even more. I wondered if our administration would put its money where its mouth is. What did I see? Again, something I had never seen before.

Not only were our deans' present to hold students back, but the head coach—who always stands at the back of the line, turned to the students and made sure they stayed put. His team and their efforts got the win—and he had the vision and the ability to see the bigger picture. No student was going to cross that line. They waited, albeit impatiently for both teams to thank one another. All players and coaches had their moment to do so. #AMDG 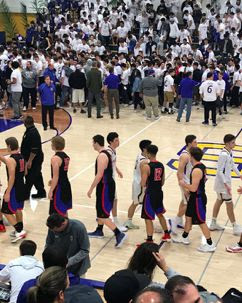 Moments later, Coach Marcaletti walked over to the section of parents, teachers, and fans—to look for his wife, He gave her the thumbs up. I know she comes to nearly every home game; I wouldn't be surprised if he acknowledged and reached out to his wife at some point during every game. But this win was special and that moment was too.

It would be hard for me to argue that the Jungle Game isn't a spiritual experience. That fire isn't friendly—which is an important way to think about spirituality. And, once the contest is over, the energy that had flooded the gym dissipates—finding its face as what Rolheiser describes as "aching pain" and "delicious hope." Pain for the team who couldn't get the win and hope for the victors of what is to be.

I suppose what we love about sports is that we can say those five words every day, or every time we take to the starting blocks, first tee, jump ball and so forth.  But those games that have a spirituality like that of the Jungle Game? Perhaps that's the recipe for seeing things we have never seen before.

NB: 2018 has been ripe for a few of these games! The Rose Bowl and the playoff game, featuring the Vikings vs. the Saints—I don't know a single person who can't say that have seen THAT before!