Something to Read: A Recipe for Nourishing Friendship 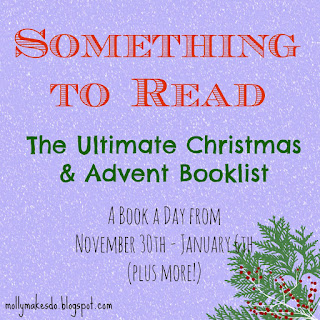 A wonderful part of my job is that I spend my days, not just with students, but with men and women who are much more than just colleagues. These fellow teachers, coaches, and counselors are people I call my friends. However, the demands of our jobs and the differences in our schedules mean I can be at school (which is big) for weeks on end without talking to them. When I do see them, one party or the other is in a rush. Our conversations are brief. I hate it. However, there are moments every so often that descend upon us, like manna from the heaven, that nourish this friendship. We are able to talk for five, maybe even ten minutes, and again, we are both fed in the way that only friendship can do.

Last week, my colleague and I found that rare gift of time and as we were about to depart, I said, "I still want to talk to you about that article you gave me this summer, written by Sherman Alexie." He said, "Oh yeah, "Clean, Cleaner, Cleanest" from The New Yorker?" "Yes," I replied.  "I have but one take away. Can I share?" Five minutes became ten and ten could have easily become twenty. 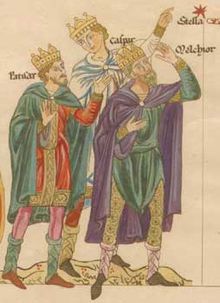 I meant it when I wrote in my last blog posting "Two Recommendations in the Four Gifts Christmas Challenge: Sports and Spirituality Style" that I think there was a fourth Mage (singular for Magi, which is plural...who knew?!). I am convinced that wise man got waylaid somewhere near Bethlehem. Perhaps he too ran into a friend. I imagine that his compadre took notice of what this wise man was bringing Jesus. A book! Ah! Something to read!" Is it for the child? For His parents? Mary and Joseph probably needed the wisdom more than their Son.

I have stopped to discuss podcasts, episodes of Fresh Air and movies with friends. Reading print media, however, is different. Holding a book, ripping an article out of a magazine, folding a journal—the material reality of ideas written and printed lends itself to giving. It should. And so, in a continued effort to promote the "Four Christmas Gift Challenge" and the book I recommended: "Raising Kids with a Healthy Body Image: A Guide for Catholic Parents."  I would like to share my favorite excerpt from this wonderful resource.

The following reflection, given with permission by the author John Acquaviva, is from the chapter, "The Truth that Heals: Wise words from scripture, saints, and scholars." His message resonated with me and my experience as an athlete. I kept reading only to discover an explanation for a picture I had seen, divorced from the who, the why and the how. This chapter introduced me to Vinicio Riva.

Every semester, I encounter one, two or five stories that capture my mind and heart. Mr. Riva was the primary subject of my favorite one from this Fall and as much as I want to write about meeting my favorite baseball player of all time: Will Clark, my next posting will share how his story exemplifies the themes of Advent. 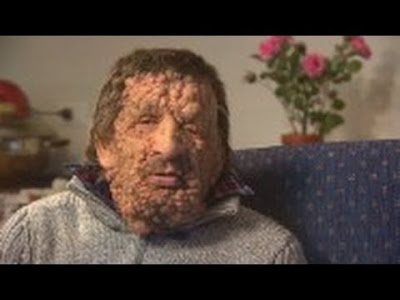 So! Here I am passing on a something to read to you...albeit it through cyberspace. If I see you at school, in the hallway, on the golf course, at an airport or in Church please stop and let's take the next five, ten, heck even twenty minutes to discuss.Wise people may stop to join us...

Be who you are and be that well.  —St Francis de Sales

I have had several male and female friends who have more-or-less lived at the gym. After some time and hard work, their bodies looked great. But their circle of friends dwindled to their workout partners, who were only sometimes genuine friends. They spent more hours working out than everything else but work or school and became so singularly obsessive about looking good that, frankly, they became boring. In conversation, they talked about their training. At dinner, they fretted over the slightest amount of salt or sugar.  At social engagements, they spent more time looking into mirrors than into the eyes and conversations of other people. I began to notice a narcissistic quality that became less and less attractive, even as they became more outwardly attractive people. In time, I found myself gravitating away from them, and growing closer to people who were more earthy, well-rounded, and real.  I mean, how often have you seen a muscle-bound, perfectly chiseled and the person working in a soup line? Well, perhaps that’s not fair, but a point is made.  When self-absorption sets in, we can forget (or simply cease to care about) the importance of serving others. 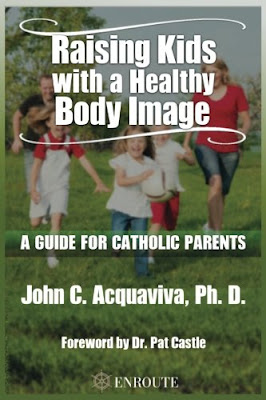 Now, this is not to say that I don’t encourage healthy exercise habits since sidestepping that would be to go against the basic tenets of my profession. It’s just that now, more than ever, everything to do with our physical nature seems to be taken to the extreme. Tattoos (the size and number), muscularity, thinness, near-shocking eye color via special contact lenses, breast size, and the dozens of ways we attempt to defy aging and improve aesthetics, are just a few that readily come to mind. Most troubling is that the inordinate amount of effort that goes into these extreme ventures often causes a shift in the way we see and serve God. Every act and each minute of anxiety tied to perfecting the body turns our attention away from and hardens our hearts to the things of God. Conversely, deeds of service and prayer for others turn our thoughts and hearts toward him. A turn toward and focus on God is always healing to the soul and leads us further down the path of self-acceptance. When we know our actions are pleasing to God we are more pleased with ourselves.

Now, way on the other side of the spectrum, are the good souls that serve God, but forget to serve themselves. In a soup line, we may see a kind gentleman who is dangerously overweight, unclean and ladling soup with a cigarette dangling from his mouth.  Is he serving God by serving others? Yes, quite literally. But even as he does so, he is abusing the body and ignoring the gift it is. It does no good in the long-run to rationalize the good deeds as a trade-off.

Our minds are an interesting place to be sometimes.

Parents who are balanced, keep things in perspective, and take care of their bodies while not obsessing over them usually pass these traits on to their children. Although we are aware that children go through phases of being influenced by their parents, we can never really know the effect we have on our kids. But as Saint Paul urges, we must always “fight the good fight of faith” (1 Tim 6:12) with the concentration, discipline and extreme effort necessary to win the battle for the well-being of our children. As we do this­—loving, teaching, disciplining, and modeling healthy habits for our children—we demonstrate the kind of love and acceptance that God has for his people.

Parents of children with disabilities have a particularly tough challenge. In an understatement for sure, navigating the world of disabilities obliges a parent to go well beyond what is required of other parents to instill a positive body image in their children. Although this book is about body image and not about disabilities, I would consider it negligent to not address the disabled, diseased, and disfigured in our discussion of body image. 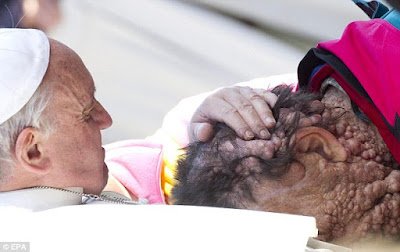 One of the most memorable photos of the past couple of years was one of Pope Francis kissing a grotesquely disfigured man who visited him at the Vatican. That man, Vinicio Riva, has a genetic disorder called neurofibromatosis Type 1 (or NF1). The pope, clearly acting spontaneously and with overwhelming compassion, probably made his encounter with Mr. Riva the signature event of his papacy.