Hard to believe that three years ago today, Derek Jeter played his final game at Yankee Stadium. I love what Jeter's former teammate Antoan Richardson wrote in The Players' Tribune: "My Journey Home" about that fateful evening.


At the time, I couldn’t believe what had just happened. But I suppose that’s what the great ones do, right? They leave the party in style. Sampras beat Agassi in a nail-biter in the U.S. Open final, Kobe messed around and dropped 60 in his last game, and now The Captain had delivered a walk-off single to say goodnight to Yankee Stadium! 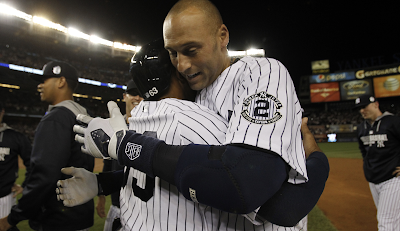 However, harder to believe is that my students know little to nothing about him. I suppose you could say San Francisco isn't exactly a stone's throw from the Big Apple or that our local team, the Giants have preoccupied their imaginations. I get that. Still, I was genuinely shocked that my question "What do you know about the Hall of Fame Yankee shortstop?" was met with silence. They needed to know who he was for the purpose of class material, but I wanted them to know about this legend for much more than the women he dated (someone did know that). I think we can all learn from his work ethic, his presence, how he was raised and what was expected of him. This is why I teach.

The Captain is a significant figure in Nine Innings from Ground Zero, a video we watch in Sports and Spirituality. In the wake of  9/11, New Yorkers turned to baseball—the American pasttime—for spontaneous rituals of grief and showcases for resilience and the restoration of normalcy. Jeter is at the heart of it all. Without "#2 there is "no catch"—the defensive play that saved the Yankees in ALDS against the Mariners. In the Yankees' post-season run for the World Series title, Jeter becomes Mr. November, he advises President George W. Bush to throw from the mound (they'll boo ya) and we learn of how he personally reached out to Brielle, the young daughter of one of the pilots killed by hijackers. What he did both on and off the field in 2001, merit discussion and appreciation. His retirement just three years ago highlighted these heroic acts as but one chapter in the treasury of his career. 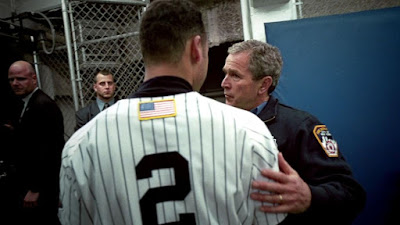 Though I have written and taught about Jeter several times in the past, I have never included him in prayer. A course like Sports and Spirituality naturally.... inherently... and organically invites creative and new ways to interact faith and love of sport. I looked at a former blog posting "Jeter's Way: Life Lesson's from #2, Derek Jeter" and create it into an Examen. In Ignatian Spirituality


The Daily Examen is a technique of prayerful reflection on the events of the day in order to detect God’s presence and discern his direction for us.  The Examen is an ancient practice in the Church that can help us see God’s hand at work in our whole experience.

This Examen would be a little different. I wanted my students to prayerfully reflect on what Jeter's fans and teammates value in him and how that might relate to his life. What you will see below is that method for prayer. I begin with factual, biographical information about DJ.  These insights, quotes, and stories spawn a question to reflect upon. Students are invited to pray with the response from both their heart and mind. 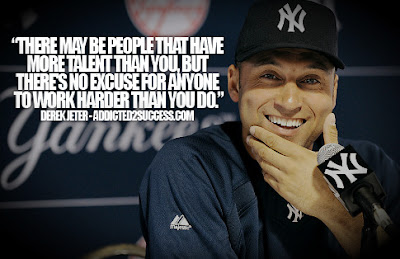 Leadership
"FORTUNE ranked him the  11th greatest leader in the world,  22 sports ahead of Apple CEO  Tim Cook."

In light of Jeter's philosophy on leadership, how do you get to know those you are trying to lead? "Asking questions" and "spending time with someone" are obvious answers. But what are some practical things a good leader adds to the mix?

Optimism vs. Negativity
"I always hear people say I give the same answers or I don't give you much. No, I just don't give you much negativity. When people are negative a lot, it starts to creep into your mind, and then you start having doubts, and I don't like that. If there's another way, show me. My job is to stay positive. My job is to limit distractions. And if you get annoyed by that, I don't expect you to understand because you're not in my shoes."

How much negativity is in your life?
Do you make an effort to stay positive?
How do you limit distractions?

Mentoring/Having Fun
Tim Raines, the one Yankee who could laugh off a slump or needle Paul O'Neill about being up a water cooler, became another influence,” writes Verducci.  "I learned from him to have fun," Jeter says. "He had fun every day. That's a big part of being able to play all those years: to enjoy yourself?

How or when do you enjoy yourself at work or school?
Can be intentional about finding time to enjoy yourself every day?
Is there someone or something that makes your work/school fun every day?How do you seek them out?

Presence
A former teammate, Matt Ruoff, this month told The Press Democrat of Santa Rosa, CA 'You always wanted to sit by him. I know that sounds weird, But Derek gave off a presence." 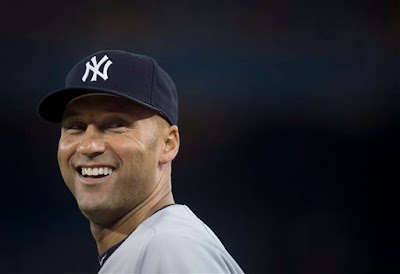 Can-Do Attitude
Jeter's parents, Dot and Charles, "never permitted Derek to use the word can't around the house. Anything was possible with hard work. There is no doubting whence come his distaste for negativity."

How often do I say "I can't?"
How can I change my point of view?How can we help my friends and teammates work hard and appreciate its value?

The Dream
"I always dreamed of playing in the major leagues. But everything that comes along with it couldn't have possibly been part of the dream. Because it's been much better." 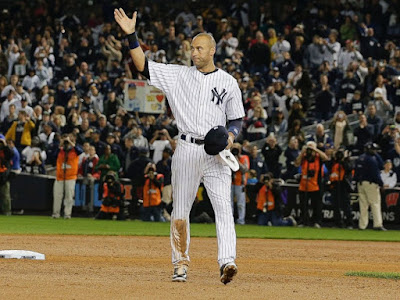 Concluding Prayer
Lord, thank you for the people in our lives who lead us to be our best selves. We are grateful for their ability to keep us focused and to see the good. Help us to appreciate our time with these leaders and the way their presence makes a difference. Strengthen our own will to preserve, to do our best, to remove the words “I can’t” from our mindset. And assist us as we pursue our dream and your dream for our world.