Go to any weight room and America and you are sure to hear one thing—loud music. And being that most weight rooms are dominated by men (women tend to gravitate toward classes at the gym) the music has a little more of an edge. The rock isn't so soft and the volume isn't so low. I have to admit, it can really fire me up.

At my "Hour of Power" circuit training class (90% male), the Spotify category must be "Guns and Roses"—if that is a category. I never knew I would like AC/DC so much. One Friday, Tom—the instructor, thought he would mix things up with a country selection. About 1/3 of the way through the class, one of men nearly lost it, he became so frustrated by what was filling the airwaves. "What is this crap?" he yelled as he broke the resistance band.

Indeed the music matters. It fires a cerebral fire that does more than pump us up. It can energize the soul and at its best, offer spiritual renewal. I was reminded of this truth by Fr. Chris Nguyen, SJ at this talk "How to Keep Prayers Relevant to Children and Young Adults" at a Faith Formation Conference hosted by the Archdiocese of San Francisco and the Diocese of San Jose and Monterrey.


I knew that he would speak about "different types of prayers that are helpful and useful in relating to God for young people of different ages" and left with the desire to explore other types of prayer with my students and in my own life.

Fr. Chris informed the audience of traditional types of prayer and the effects it has on us. He said "For example, the repetition of the Rosary calms us down allowing us to enter into Sacred Space. What are other ways of prayer that bring us into sacred space?"
"And there are times our prayer life may grown stagnant and need regeneration. Prayers that offer spiritual renewal bring us into a space of gratitude. We are able to recognize God's great gifts. Christian rap has a way of doing this."

I loved this moment of his presentation. Here was a Vietnamese Jesuit, the head of novice formation for the California province of the Society of Jesus recommending Christian rap. There was a small chuckle from the audience. I know what they were thinking—Christian rap? Who is he kidding? I know this because I reacted that when we I first heard about this niche genre of music. Don't knock it until you've tried it. 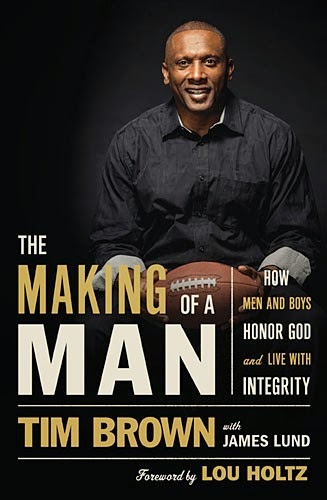 This summer I read "The Making of a Man" by Heisman trophy winner, and one of the greatest wide-receivers to play in the NFL, Tim Brown. A devout Christian, Brown has never kept his faith hidden or private. He wrote this book as a guide for "how men and boys honor God and live with integrity." He admits where he struggled and what it has taken to right his path. He lives counter-culturally. In short, he is a true Christian.

Once small way he chooses to make this known is by the music he listens to. "When I"d arrive at the locker for practice or games, Charlie Gardner would yell out, "Turn that music off!" or "Hold up, Mr. Brown is coming through!" Though Charlie wasn't a believer himself, he saw that my words lined up with my actions. That was enough for him to give me VIP treatment."

"Once I got established in the league, and especially after Marcus Allen left the team, my teammates started showing me respect in other ways. Mondays and Thursdays were my days to lift weights, which everybody knew. Everybody also knew that I preferred gospel music. So whenever I showed up at the weight room on those days, gospel was all that played. I didn't ask the guys to do that, but it was something I appreciated."

I read this and wondered how gospel music could do what Springsteen or Journey has often done for me and my biceps. How could it possibly inspire me in the way that a loud Def Leppard song has a way of doing? Let me heed my own words here:don't knock it until you've tried it.

Driving a van full of students in Camden, NJ this past August, one student, tired of the unyielding requests from her classmates let the radio dial sit on a gospel music station. At first, students thought it was funny and interesting. Within about 5 minutes, they were bouncing...moving to the beat. Someone realized the message wasn't unfamiliar to them. They were words they had often heard, but in a new way. It was real, it was true gospel music and it was singing praise to our Lord and quoting from the Bible.

I told them about Tim Brown in the locker room. I shared with them my own love for music—which is sometimes deepened by selections from the locker room. They were open to this music. Why? Because good music is good music. Give it a beat and a strong rhythm and it just might stay with you.

Although we did not encounter any Christian rap, I could see how it might be something that could offer spiritual renewal. Rap isn't all that far from gospel music and with a Christian influence, it might be worth trying. Who knows, maybe the gym is sacred space for more people than we know....

Posted by Anne Stricherz at 9:04 PM