What I learned from a football jersey... (Part II)

There are some creative and interesting terms to describe Catholics who attend mass twice a year. The most popular is "C & E" but recently I heard a friend refer to this demographic as "Chreaster Catholics." Hmm, are they also known as "Eastmas Christians?" Regardless, I love both a packed house and that many still recognize high holy days are important. I also appreciate it when presider welcomes these folks in a special way. I remain hopeful that something will stir in their hearts to return the following week...and the week thereafter...

What prompts a person to attend Sunday services regularly? I can tell you why people don't ,but there a number of compelling reasons why they do as well. For example, one may have a special role in the liturgy; they may serve as a lector, usher, greeter, altar server or Eucharistic minister. Perhaps their parish is an important community in their lives—a spiritual home away from home. Others attend because it is one of God's commands. Jim Emerson put it this way: I attend Mass like I'm 6'1." It's who I am and what I do. A student once humbled me when he admitted he attends because if he did not, he would miss the eucharist. A mystic in my midst! But if I were trying to convince a C & E Catholic to return to the fold, my reason might come from a lesson I learned through an unlikely gesture—the jersey ceremony, in an unsuspecting place—the pep rally.
As mentioned in "Pope Francis on the "Memory of Grace....and a Football Jersey" at the school where I teach, we have a tradition known as the "jersey ceremony" that takes place at the pep rally before the Bruce Mahoney football game. Each senior on the varsity football team honors a teacher of their choice with their uniform. They thank their teacher and share why they want them to wear their jersey at the game. This was a meaningful experience for me because it served as an invitation to pray for the young man whose jersey I got to wear. But what was more interesting—culturally and sociologically—was the reaction from my colleagues who also received the uniform.

The day of the Bruce Mahoney game is high energy for students. We all make small talk and ask "are you going to the game tonight?" This is the one football game a good percentage of students and faculty attend. Ask anyone who received a jersey and a common response is the more often than not, "I wasn't going to go, but I need to now."
This is fascinating to me. Over 5,000 people fill the stands at Kezar Stadium for this game of rivals. I can guarantee that the athlete on the field will not see the teacher in the stands wearing his jersey. The community that supports this football player—his parents, family members or friends and classmates may catch a glimpse and take a mental note, but maybe not.

I'll speak for myself here. I go because I want to represent that senior football player. I feel honored to do so. And, I want to cheer for the team just a little more. I think my coworkers feel the same way.

And what did I find? I was touched by how many people said "Congratulations!" and "what a great kid!" Wearing #75 was an invitation to talk about a special student and to ask my colleagues about others. 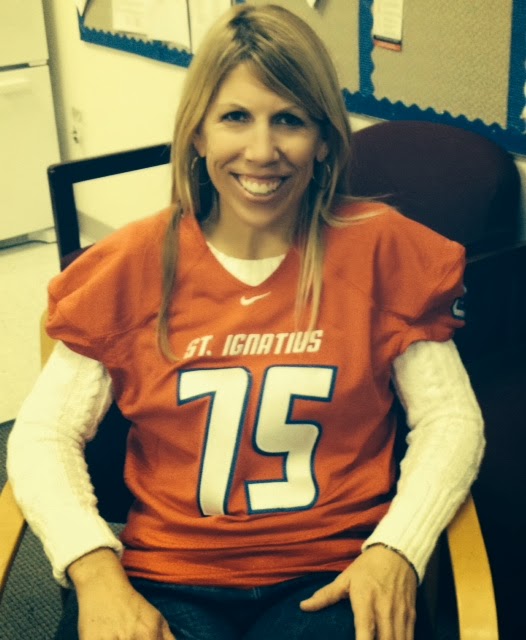 This experience gave me pause to think how we might be different if we went to Mass with a similar mindset. What if we attended Mass because we feel as though we have been given something special?...as though we want to honor the One who gave it to us? Ideally our pastor and members of our community would notice that we are there, but the motivating force remains: we go because we believe it's important to do so.

And from the other perspective, I have heard so many football players share their frustration that more people don't attend their games. They wonder why (more) students don't come out to cheer for them and enjoy the contest. "It's fun! They don't know what we they're missing." I know these young men feel as though they work hard. Support from the fans means a great deal and makes playing that much more fun.

This insight and perspective also let me to wonder what the priest, choir and all those involved in the planning of the liturgy must feel. I'm sure the celebrant would rather preside to an attentive crowd; I imagine the choir would rather not be the only voice in the church. Perhaps those who love the Mass believe that many just don't know what they are missing...but they do. They are missing Christ in word and in flesh..and in one another.

Who knew that a simple football jersey could invite so much thought on who we are and what we do. Perhaps in 2014, you will attend Church services more regularly or perhaps it will be with a new mindset. Or maybe you will go to a high school sporting event that you had never been to before. Someone will notice...even if they don't, you will. I look forward to hearing what you see and learn. Enjoy!

Photo Credits
flowers
Bobby & Joe at the Bruce: used with their permission!
CARA study
Posted by Anne Stricherz at 3:48 PM