US Open 2013: Delight and Confusion

It may seem a little weird, but every time a player I really like takes the trophy at the finals of a Grand Slam, I get teary eyed.  I can't help but laugh and cry in delight; a satisfaction for a tourney well done.

When Serena Williams won her second straight US Open (and fifth overall), it wasn't exactly waterworks, but I was relieved and thrilled that she regrouped and pulled off a definitive third set to secure the win.
As she held her trophy high, my tears were crowded by another emotion—confusion. Serena was awarded with a check of $2.6 million dollars for her feat. Her reaction was priceless. She gave a playful smile and eye roll that said "yeah, baby."  I'm glad she did. You can say that prize money is well-deserved, that she is the best of the best (and I hold no doubt that she is. I believe she is the best female athlete in the United States. I can't think of another woman who comes close. None. NB: this is fun to debate). But I also think that prize money is absurd.

I know that sports is a multi-billion dollar business. I am aware that athletes in their own way are entertainers and they too receive millions for what they do.  I understand that her check from the United States Tennis Association is for winning the entire tourney, but it upsets me that we have this amount of money to award to someone who plays a game.
That sounds like a cheap shot, no? In his autobiography "Open," Andre Agassi wrote "Part of my discomfort with tennis has always been a nagging sense that it's meaningless." His claim stayed with me because on some level it's true.  And yet, pursuing one's passion and striving for excellence is not without meaning.  Athletics is where I found my passion. It is where I see excellence on display in physical and mental contests, man against the game/ clock, skill versus talent, heart against head.  It keeps us awake at night. It is the "stuff" of great memories.  It has kept me smiling and heck, even crying for days. That is not meaningless.

So why the confusion? Why the complaint about $2.6 million dollars. I just don't understand the law of economics.  Somewhere along the way, we decided it was okay to pay our athletes millions as prize money and exponentially more for branding.  I know I can't do a single thing about the fact that Tiger Woods makes more money in one round of golf than a worker in Jakarta who has been subcontracted by Nike will make in his or her entire life, but it still upsets me.  It blows my mind that there is that much money to extend and yet there is great need. Dire need.  It is my conscience qualm. 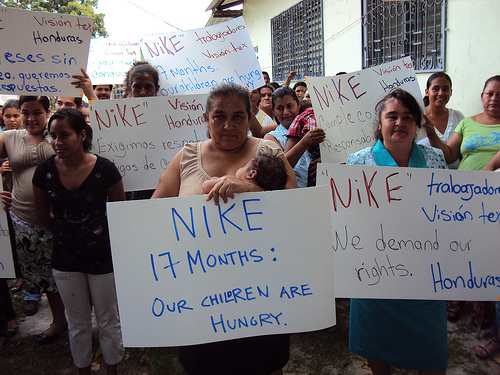 I can hear the retorts now...he's the very best as what he does...but it still leaves me uncomfortable.  Fortunately, my question is not in vain. In the article, "Good Sport" Luke Hansen, SJ writes:


Maybe at one time sports fans could simply enjoy the helmet-smashing hits and record-breaking home runs and look the other way when our favorite team benefited. Those days are over. This raises important questions: Is it enough for me to be a passive consumer, simply looking for entertainment, with little concern for the internal business of these sports? Or must I now become a more conscientious and responsible consumer? Sports are big business, of course—the N.F.L. brings in more than $9 billion annually, and baseball is close behind ($7 billion)—and fans drive this machine by spending big bucks on game tickets and team apparel and by sending television ratings and advertising revenues through the roof.

Do fans have the power to help shape professional sports? Remember the swift resolution of the labor dispute between the N.F.L. and its locked-out officials in September 2012. In a nationally televised “Monday Night Football” game, replacement referees affected the outcome with a botched call on the final play. Fans decided they had had enough. That night the league office reportedly received 70,000 voice mail messages demanding an end to the lockout. Within 48 hours, league officials and the referees reached a tentative agreement, and the regular referees were back on the field.

This mass action makes me wonder what else might be possible if sports fans become genuinely concerned about player safety and are willing to do something about it or are able to channel their outrage constructively over the continued use of P.E.D.’s.

I have a hard time believing anyone is going to rally around paying professional athletes a just and fair wage.  I know it's market driven. But it's another question worth considering within the wide world of sports.

In the meantime, I hope Serena enjoys the $1 million dollar bonus she received for winning the US Open as Emirates Airline US Open Series champion.