Hard to believe, but another school year is underway. The first day of class is a bit of a song-and-dance.  I assign seats, introduce the course, hand out the syllabus—in short, I do too much of the talking. To break the monotony, I ask students to write "three things you might not know about me." I read these out loud without revealing who the author is.  It's a fun task for the class to guess who wrote what.

With any activity, it's important that the teacher model it first.  For the purpose of the blog, here are my three as they relate to sports and three that relate to the spiritual life.  It might be fun for you to come up with your own.
Sports:
1.  I am quasi-obsessed with the multi-sport athlete.
This may come as a surprise to no one given the airtime the multi-sport athlete gets on this blog, but if you are looking to engage in a conversation I will never end, this is the topic. It's also a hot topic because the high school three-sport athlete is exceedingly rare. At St. Ignatius where I teach, last year just two seniors—one male and one female—played three varsity sports.

With that in mind, imagine my fascination with Sports Illustrated's collegiate athlete of the year finalist, Jennifer Brenner. Honestly, I don't know why she didn't win.  A four-sport athlete at the University of Oregon—I repeat 4-sports (in 3 seasons!) at a D-1 school—is more than an anomaly. it's incredible. I held court for five minutes asking my colleague to guess what those sports were.
One of my favorite athletes right now is Andrew McCutchen.  I attended the Giants' 2012 Opening Day vs. the Pittsburgh Pirates. It was hard not to notice the Buccs' center-fielder  "Cutch" looks like he could play any number of sports on demand.  He is fast, focused, competitive and understated.  Hard on offense and defense, I wasn't surprised to read he played football in high school and ran track on the championship 4x100 m relay team for the state of FLORIDA.  I could engage in you with a hypothetical conversation about what position he played in football for too long.  Cornerback is my guess.

2. I wish I were left-handed.Lefties may be 11% of American society but their impact is big in sports.   They bring something different and valuable to the court, field, and diamond.  Lefties open it up.

The list of southpaws is not short—give it a shot. Some of my favorites include David Lee and Chris Mullin (Warriors), James Harden (Rockets), Will Clark (Giants), Bubba Watson (golf), Steve Young and Tim Tebow (football), Yannick Noah (tennis) among others.

And I find it even more fascinating that two athletes at the top of their gameplay it left-handed but are righties.  Can you guess? Phil Mickelson is the gimme. The other? Rafael Nadal.

When it became apparent my niece and God-daughter Grace was a lefty, I found yet another reason to delight in God's creation.

3.  I wish I were more competitive.
I consider myself a fairly competitive person, but as an athlete, I wish I had that edge that I see in some of the greats.  To play at the highest levels, that wiring to win is necessary.  I am fascinated by the many faces of sheer drive in some athletes.

Case in point.  Michelle Akers was named by FIFA as the female player of the century.  She is also one of two women named to FIFA's top 100 soccer players of all time.  My favorite vignette from ESPN's "9 for IX: The '99ers" is when her coach, Tony DiCicco talks about her as they flash images of the midfielder/forward in action.  He says "she was by far the most technically gifted player on the field. And she was a warrior. That warrior mentality is why we won."
One minute later, we see Akers talking about playing on that team. She said "I went into every game, ready to face my opponent with the attitude It’s going to be bad day for you guys.  We are stronger and fitter.  It’s going to be a hard day for you!:

She meant every word and she backed it up.  If I were to play Akers, it would be a bad day let alone week for me.  Awesome.
Spiritual
1.  Inclusive language is very important to me.
I don't consider myself to be a raging feminist; I've never wanted to change history to "herstory" but I do believe communal prayers should be as inclusive as possible.  When changes were made to the Mass, I wish this had been taken into consideration.  Yes, I find value in saying "humankind" over "mankind."  I don't identify God and "He" or as "She" but as God.  Perhaps God-self would agree.  I take no issue in referring to God as "Father" because that indicates a relationship, but in other examples, I wish the Church was more sensitive and thoughtful to word choice.

2. I like a short mass: But then again, who doesn't—right?

I should thank the Mormons for setting the bar high. Their four-hour services put Catholics to shame. I make it to mass every Sunday, religiously (pun intended) and know what I am in for. The hour-long obligation isn't asking too much.

I've read that a good pastor is like a barometer—they read the energy and sentiment of their community.  I guarantee it's a rare group that is hoping for a 20-minute plus homily (sorry Father).

A wise person once said, "leave 'em laughing."  Not bad advice....and leave them wanting more. The mass already has its ritual and order; its grace and the power of our presence should not be underestimated.  But to do that in under an hour is just so sweet... 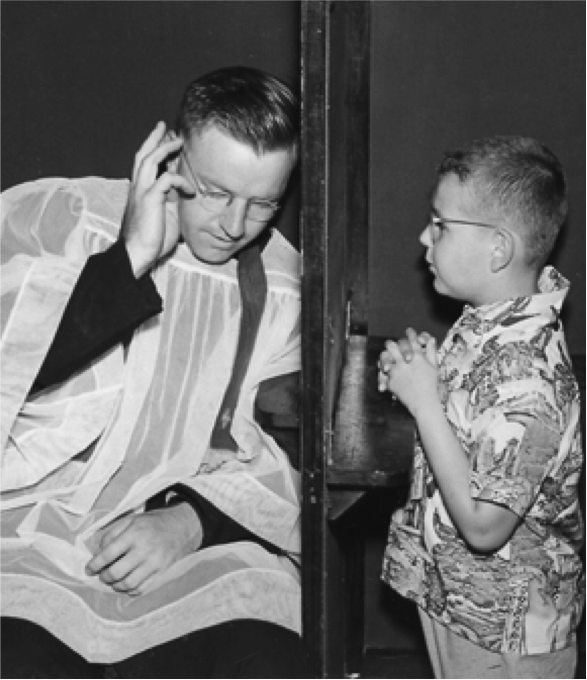 3. I think Confession is underrated.
Most Catholics have a hard time with this sacrament. It's not easy to take an inventory of our sins and articulate them to another person.  It can be humiliating and uncomfortable, but I also opens us up to God's grace like nothing else.

In the confessional, I have been told I am being too hard on myself.  I have been challenged to work harder and to love more. I have been advised in ways I would have never imagined on my own.  I have felt God's mercy and I have come to know my own ability to forgive others and myself in a profound way.

I return to Confession because my need for God's grace and mercy never ends.  Loving in the way Christ does is not easy; He never said it would be.  I'm grateful I have the support of the sacrament to continue on that journey.

Have fun with your three (or six) items!  Here's to a great (school) year!