Tomorrow is my final day of teaching seniors.  It is a day of thanksgiving for all we have learned, shared and discovered this past semester. It is a time to impart wisdom and warm wishes.  As taken from the woman who hired me--teacher, prophet, activist, advocate for the poor, and now the proud owner of a signed copy of Martin Sheen's book Along the Way,  I salute Mary Ahlbach and the Top 5 of her "10 Things I know for sure."  I've added with Sports & Spirituality.

5. God loved you first.  Love God in return through loving others and our heart will be filled with joy and peace (Cura Personalis). “Do small things with great love.” (Mother Teresa)

The last thing I expected from a former NFL defensive lineman who played with the Baltimore Colts for 8-years is a coaching philosophy rooted in love.  However, Joe Ehrmann, who now serves as the defensive coordinator at the Gilman School preaches this loud and clear.

The Pultizer prize-winning book Season of Life, reveals his “man for others” philosophy it becomes reality.  He asks them:


“What is our job as coaches?”
“To love us,” the boys yelled back in unison.
“What is your job?” Joe shot back.
“To love each other,” the boys responded.
The words were spoken with the familiarity of a mantra, the commitment of an oath, the   enthusiasm of a pep rally.
This was football?

Yes it is.  Joe Ehrmann knows how to do “small things” with great love.  He makes it a priority.  In fact, it’s his philosophy.

4. “Joy is the most infallible sign of the presence of God.”  (Pierre Teilhard de Chardin, SJ).  Laugh often and much. Stop complaining. Only listen to music that feeds your soul. Marry someone who makes you laugh for all the right reasons. One smile exercises something like 120 muscles in your face. 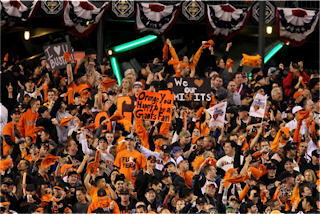 Joy: I pulled up to AT&T Park and said to my two friends in town from Denver, CO—“welcome to the home of the 2010 World Series champions.”  Two years later it still feels so good to say that; I delight in every word.

Indeed, certain games, athletes, teams and accomplishments have brought great joy to my life.  Enough that we can recall those moments of who/what/where/why and when years later.  And, when I do, I can’t help but have a smile on my face and joy—deep joy in my heart.

Stop Complaining: The late Randy Pausch, author of The Last Lecture lives by the same mantra.  In his presentation on Oprah he “tells on himself. “ He shares that when he was working on his doctorate, he started to complain to his mother about the taxing workload.  He was tired and mentally exhausted.  He found a different kind of sympathy from his mom. 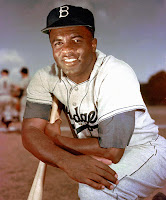 She said “Talk to your father; he knows just how you feel. When he was your age he was fighting the Germans (in WWII).  So much for complaining….

He then shows a slide of Jackie Robinson, the first black major league baseball player. It was in his contract not to complain, even when the fans spit on him. Men and women aren’t born heroes.  They are born when opportunity and adversity meet.   Just one of the many reasons this Hall of Famer is beloved by so many.

3. Feel loved by God as if you were the only human God had ever created, both spiritually and physically.  And treat yourself, mind, body, spirit, accordingly.  “All is gift. All is grace. All is holy.” 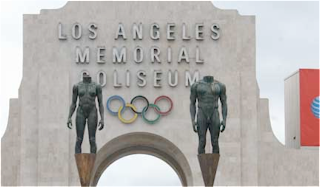 I hate everything about the Los Angeles Memorial Coliseum—it is the home of the Trojans, USC’s home turf, set in LA—all of it, except for one thing. At the entrance is the Olympic gateway that commemorates the 1984 Olympic games.  Rising 25 feet above the ground, are two bronze torsos—one male and one female athlete.

This work of art reveals that the human body is truly a gift, it is grace and it is holy.  An athlete’s body is a machine—it is primed and sculpted.  It is more than a means to an end.  It is a vehicle for grace and victory, triumph and glory.   It should be honored in every possible way.  I hate the Coliseum, but that work of art leaves me breathless. 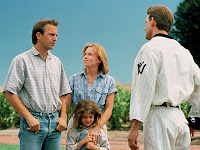 Unfortunately, I don’t have the story available.  The closest example I can give is to point you to “Field of Dreams.”  Ray and Annie Kinsella, their daughter Karin and Terrence Mann and can see the baseball players who and Ray’s brother in law, Mark cannot.  Those ghosts are real.   Believing is seeing.

1. “Hold your parents tenderly, for the world is a far, far colder place without them.” (Emily Dickinson)

I once read a study that confirmed every great athlete has at least one parent who (or parent type figure) who helped them get to where they are today.  Parents believe in us when no one else does, can or should. Case in point, even Tiger Woods’ mother was at his first official press conference after the world learned of his “transgressions.”  I don’t know how she did it, but his world at that point was already frigid.  Perhaps his mother made it less so. 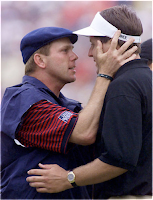 The final round of the U.S Open (golf) takes places every year on Father’s Day.  In 1999, Phil Mickelson’s wife Amy was supposed to deliver their first child that very day, as he battled for the championship title. With a pager on his belt should he need to leave, Mickelson lost to the late, great Payne Stewart by one stroke.

Stewart cupped Mickelson’s face in his hands and said, “I know you’re disappointed.  But something far more important is about to happen. You’re going to become a father. Your life with never be the same.”

Perhaps it is only when we become a parent that we fully understand the love or our own parents. Regardless, they will not always be with us.  Let us cherish the time together.
Photo Credits
Stewart and Mickelson
Jackie Robinson 42
LA Coliseum
Field of Dreams
Joe Ehrmann
Posted by Anne Stricherz at 11:39 PM