Why I’m Not Writing About Tim Tebow

With a blog about Sports and Spirituality, people want to know one thing: what’s your take on Tim Tebow? And lately I’ve been asked one question: When are you going to write about him? I’m here to tell you why I am not writing about number 15, the devout Christian both on and off the field. 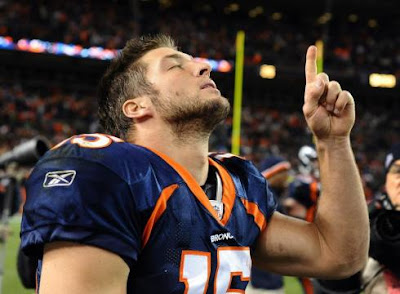 First, it seems to me that everyone else is writing about him. The quarterback has appeared on the cover of Sports Illustrated eight times! In fact, I did a double take when I received my December 13, 2011 issue. Didn't I already receive this? No. He appeared on the cover just two weeks prior; that’s right--twice in three weeks. 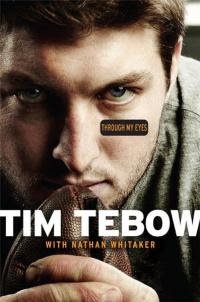 One has to try hard not to read about Tebow as you will find features with creative titles like “High Praise,” “The Tebow Effect” and “Are Tim Tebow and Justin Bieber making Christianity cool?” in everything from the Wall Street Journal and US Weekly, to religious periodicals like America magazine and more. One can also read information by him. His autobiography “Through My Eyes” debuted on the New York Times hard cover nonfiction bestseller list at number six.

Second, the other reason for my radio silence is because I simply don’t understand the controversy. From what I have gathered, people have one of two major complaints about him. One is that he just isn’t that good. The other is that people find his public displays of faith (PDF) as either inspirational or inappropriate. And like most controversial topics when it comes to matters of faith, I hear more people find “Tebowing” to be offensive or wrong. With that, I suppose I will eat my words and weigh in. I’ll begin by clarifying...

Fans and experts (in their own mind?) claim that he hasn’t mastered the most basic skill of his position-- he throws for too few yards and he does so inaccurately. Others say he’s too slow or that he’s not a great athlete. And yet, his achievements on the field suggest otherwise.

Tebow led the Florida Gators to not one but two NCAA football championship titles. He won the Heisman trophy. He earned the starting job from a player who is a great athlete, Brady Quinn; his jersey now reads “Riding Pine.” When Tebow took over at starting quarterback, the Broncos had a 1-4 record. Under his leadership, they climbed into a first place tie in the AFC West (and finished 8-8 in the regular season). One of Tebow’s jerseys was the league’s best-seller this past Christmas season. The other one says “Jesus” which alludes to the other area of concern. 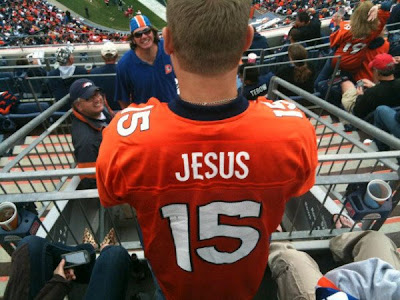 Many have referenced Matthew 6, 5-6 to address why Tebow’s public praise is wrong. It reads And when you pray, do not imitate the hypocrites: they love to say their prayers standing up in the synagogues and at street corners for people to see them. ... But when you pray, go to your private room, shut yourself in, and so pray to your Father who is in that secret place. --Matthew 6, 5-6

We know that Jesus ate with sinners, lepers, tax collectors, and befriended a prostitute. He was loving and compassionate and yet He was clear in his disdain and judgment against one group of people: hypocrites. Men and women who lack integrity; people who show a public face that is other than their private self. 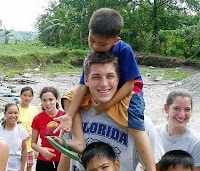 If there is one consistent remark about Tebow, it’s that he is authentic. His faith is front and center of his life. His missionary work in the Philippines, his morals and values and how he lives them out on and off the field verify he is anything but a hypocrite. He reminds me of another devout Christian athlete, Kurt Warner. In the article “Does God Care Who Wins The Superbowl?” Warner said “If you ever really want to do a story about who I am, God’s got to be at the center of it . Every time I hear a piece or read a story that doesn’t have that, they’re missing the whole lesson of who I am.”

For Tebow to not give thanks and praise would be to miss out on who he is. I have thought long and hard about what my reaction to Tebow or any athlete who gives public praise says about me, (and less about them). As a Catholic, I believe my faith tradition does not put a tremendous influence on praising God. To some degree, it doesn’t speak to my personality either. But when I do, I know that it feels good. It is as though my soul is lifted! 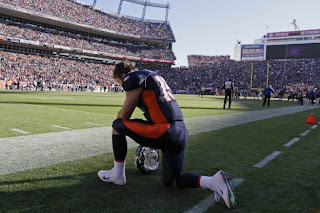 And one athlete whose words of praise lift my soul is Eric Liddlell, a Scottish runner. In the movie “Chariots of Fire, he said “to win is to honor Him.” How often do I think about honoring God? Is winning really honoring God? And does that mean to lose dishonors God? Far from it.

Tebow, Warner, all the men who will take the field in the AFC Playoff game have been given great talents and abilities, that’s why they are professional athletes. In striving for victory, Tebow knows the source of his life and livelihood is God. He will be happy to share with you on and off the field with both his words and his actions why this is true for him. Now that sounds like a story worth writing about….