The Bus Leaves in 40 Minutes….

My friend Kevin and I walked out of the bar as if we had just heard the verdict of the Rodney King trial. Disgusted. Disappointed.

It is unfair of me to compare what most Giants fans consider to be “the worst loss of the year” to a matter of injustice. But the dramatic walk-off exit is an appropriate gesture. And sometimes we sports fans take matters far too seriously, which is why I appreciated what KNBR radio host, Brian Murphy said this morning: The bus leaves in 40 minutes. What does this mean? And why is it important? 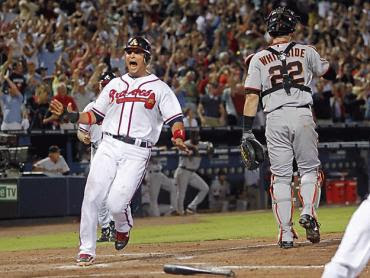 When the Giants re-entered the club house after what was a huge loss, what do you think they heard? Nothing. It was silent. What did they smell? Fear? Probably not. I think they smelled a lot of sweat; it’s Atlanta in August. We were leading by two runs at the bottom of the 9th. The Braves and Brian Wilson certainly made the Giants sweat. What did they taste? They almost tasted victory. Who didn’t mentally and prematurely include a game in the win column? What did they feel? I know what I felt as a helpless fan 3,000 miles away. I felt torture. But what did the players see? They saw a sign that read: The bus leaves in 40 minutes.

And that’s the truth. The bus left 40 minutes after the conclusion of the game. Players had 40 minutes to shower, talk to the media, eat, change, and do whatever they need to do. Pack up your things and go. We’ll be back at it tomorrow and play again. There will be another bus tomorrow.

I think it's an important metaphor for life. Some events—some losses are indeed life-changing. Some are a bleeding injustice, a deep betrayal, or an inconsolable grief. But other losses or misgivings, although they sting, are just that—a loss. It’s important to remember many losses trials and challenges are going to happen in a season; the collective whole is always a sum of its parts. Yes, last night was one part...but there's another part tomorrow...and the next day. The bus will arrive and leave on those days too.

Photo Credits
Braves win
Wilson after a loss. He only had 5 last year; last night was his 5th
Posted by Anne Stricherz at 3:36 PM