How a National Championship (and Advent) Can Challenge Us to See Differently.... 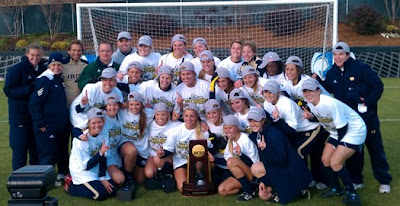 Ask me how many national championships Notre Dame has and my immediate response is “11 National Championships, 7 Heisman Trophy winners.” I say this like it’s my social security number; a vital statistic that I know by heart. But you might be asking a different question, and you might not care about the Heisman! How many championship titles does a school that fields 26 varsity teams have? Unfortunately, I need to do some research. I do know, however, that on December 5, the women’s soccer team helped the Fightin’ Irish earn one more. 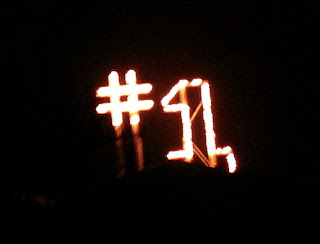 I hope the student body lit the number one on top of Grace hall in honor of the team's win in the NCAA finals. I hope a number of alumni were proud of a this talented team and not forlorn about the 22 years that have passed since the last football championship (or 17 if you think like I do, since the BCS *gave* it to Bobby Bowden and FSU).

And, in a special way I appreciate this victory all the more because of Coach Randy Waldrum’s remarks. He said, “Please have the courage to write that this was the best team in the country, not that this was an upset. I know everybody had preordained Stanford as the national champion this year. But I would make the argument that once the NCAA tournament started, the path we took and the way we won games ... we clearly were the best team in the country.” I love the perspective he challenged the sportswriter to take—to find the greatness in this particular team.

In terms of our faith, are we challenged any differently? Are we not asked to find the greatness of each individual person? John Paul II’s encyclical Evangelium Vitae calls all people to recognize “the value and dignity of every individual as a human being, without any distinction of race, nationality, religion, political opinion or social class.” He references Jeremiah 1:5 "Before I formed you in the womb I knew you, and before you were born I consecrated you." Scripture and the moral teachings of the church continually affirm the value of each human life. It is sacred and holy. It is a great gift. 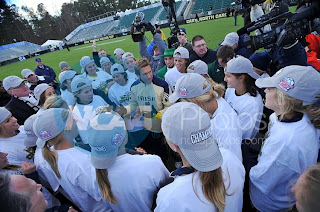 Whether he knows it our not, Coach Waldrum’s remarks also offer a fitting reflection on this holy season of Advent. The readings during the four weeks of this liturgical season bear witness to holy people who had courage to see and do things differently. Mary’s “fiat” her yes, made the Incarnation—what Christmas is really about—possible! Even Joseph, our silent saint, a righteous man listened to the angel and stayed with Mary, who was with child. 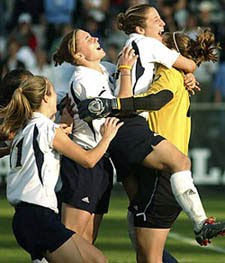 Even though soccer is not one of my top 10 favorite sports—get ready for the 2010 top 10 list, I have tremendous respect for the sport and its athletes. My dad and I have an on-going debate of what athlete is the best athlete in all of sports. While I make the claim it’s the point guard, he continues to believe it’s a soccer player. I’ll see if I can’t take my own advice here in the new year—to see and think about things differently. It just takes a little courage….