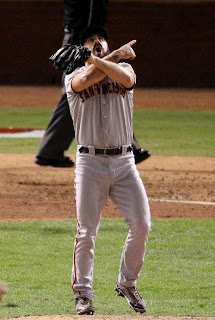 Many people know that Giants closer, Brian Wilson celebrates his saves by thrusting his tattooed arms in the air and crossing them. The X, however, stands for more than execution. As admitted during his interview with Jay Leno, the right-handed reliever is a Christian. His unique gesture first honors one God--the Father, and his own father--Michael Wilson who died of cancer when Brian was 17 years old.

Wilson isn't the only player who displayed overt gestures of his Christian faith on the field. World Series MVP,Edgar Renteria made the sign of the cross before he came to bat and several players said words of thanks to God upon their NLDS, NLCS and World Series victories.


I should take a poll on Americans thoughts with regard to public displays of faith (a new acronym??--PDF?!). I know reactions would be mixed--responses might raise more questions than answers. My guess is the same would be true in light of intercessory prayer. How should we pray for the Giants? Should we? Here is one humble reflection...

“And for what shall we pray on this World Series night?” asked Fr. Gary at the monthly Young Adult Mass at St. Dominic’s parish. Considering what was taking place at that very moment across town on Third and King Streets, there was a nervous laugh from the crowd. Should we pray for the success of the Giants? At least out loud? This is a common question of the faithful—faithful Catholics and those Giants fans that didn’t stop believing. 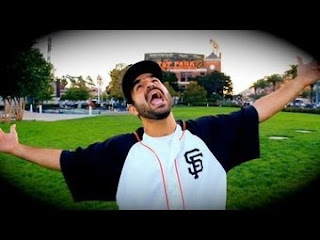 The Catechism of the Catholic Church cites Saint John Damascene's definition of prayer as "...the raising of one's mind and heart to God or the requesting of good things from God." Once the pennant race began in earnest, “my mind and heart” were preoccupied with this team, replete with personality and heart. “Requesting good things from God” resonated with my hope for the 2010 Giants but in light of the world’s greater needs—even those of our own San Francisco community, my prayers felt hollow.

Prayer is however a gift, it is a grace, and in prayer, we are always called to dig deeper into our hearts and to realize where God may be working in our midst. For me to sit with this understanding is to open myself up to the reality that God is in the big and the small, the trifling an the critical, my resting and my rising, sports AND spirituality—not either/or.

That evening some prayers were easy t0 pray. I didn’t have to dig very deep to pray in gratitude for the model the Giants have been to us as a local, San Francisco community. Teamwork, hard work and celebration have been so apparent. The sense of connectedness that October baseball prompted was a gift. I met those prayers that I found challenging to pray in a new light. At that moment, I thought that praying for the Giants to win and bring some needed joy to our community was an appropriate prayer. We don’t live our life in compartmentalized boxes. Even a professional sports team can leverage a community. “God gives the increase.” How true this is! 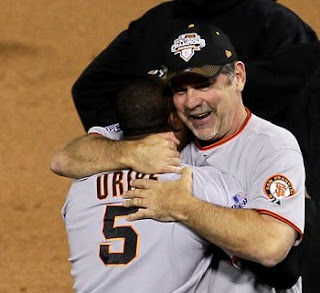 At the conclusion of the Prayers of the Faithful, Fr. Gary didn’t shy away from what everyone in the church was thinking. He said “we pray tonight for both teams participating in the World Series—for good competition and the health and well being of all participants. And we ask if God should be so generous as to put the series in the favor of the Giants, so be it.” Again, a nervous laugh accompanied a robust “Lord, hear our prayer.” Fr. Gary modeled for me to bring to God what preoccupies my thoughts—the big and the small. He called the community’s attention to what was taking place in the church—from the world’s greatest needs even to those of the San Francisco Giants. And why not? For THIS is what we pray to the Lord.

Photo Credits
Brian Wilson
Don't Stop Believin'
The Other Bruce
Posted by Anne Stricherz at 8:33 AM