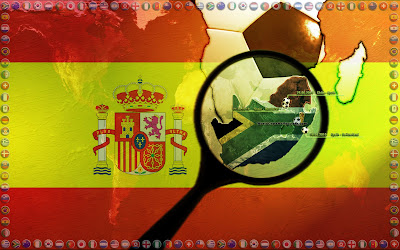 When Rafael Nadal captured the 2010 Wimbledon men’s championship I was unsure if he was more excited about his victory or the fact that Spain was in the World Cup semifinals.

His dramatic collapse to the ground, followed by a somersault on Centre Court, in addition to his now trademark “take a bite” of the trophy confirmed this victory had a special significance. The definitive straight set win clearly indicated that this tennis great was back where his 24-year old self wanted and ought to be. Furthermore, it verified that all he endured in 2009—the end of his 31-match winning streak, missing Wimbledon, playing for eight months without a title, losing the No. 1 ranking, and, hardest of all, dealing with his parents' separation did not kill him—it only made him stronger (thanks Nietzsche).

Still, his gratitude and deep satisfaction in that moment paled in comparison to the near explosion of joy and alegría that overtook his posture, smiling eyes, and limited English when the BBC announcer asked him about Spain’s pursuit of “La Copa Mundial.” Make no mistake, for most of the year, Spain is a country divided between Real Madrid or Barcelona. But World Cup soccer bridges the divide. Come Sunday, should Spain win, all of España wins. And Rafael Nadal would prefer that his win at Wimbledon be viewed the same way. 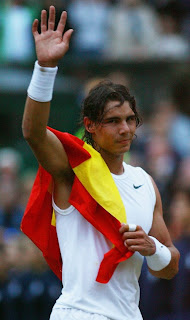 Tennis is obviously an individual sport and yet, I’m not sure Nadal sees it that way. He said “a win here was always my dream, and I did it two years ago, today and for the Spanish players for the last 40 years it was very difficult to play here. We are doing better now and we are very satisfied with that.” In 2008 after completing what was then the longest match in men’s final history, Nadal ran to the stands where he acquired the Spanish flag which he draped over his shoulders to wear as his victory cloak. In what was already an emotional interview, Rafa pleaded with the announcer to give a special message to his family and fans in his native tongue. He was immediately free to express his deeper emotions; his entire body was at ease and the same sentiment colored his face—joy and alegría.

This was a privileged moment, not only for Rafa, but for me to witness. As someone who has relentlessly pursued proficiency in Spanish I often look upon native speakers in awe and humble admiration. As the game of soccer has its beauty in the footwork and timing, so too does the Spanish language have its beauty in its rhythm and flow. I seek fluency because I agree with the old proverb when you learn a new language, you "gain a new soul."

The soul is the spiritual part of human beings that together with the body forms one human nature. As far as I knew, we only have one soul, and yet I somehow I recognize the truth in this proverb. In learning a new language, I have learned more about my own native tongue that I ever expected. I view culture and people through broader lens. Yet, I am more aware of the strength and its limitation of words, of language. For example, to me, the Spanish words for soul-- “alma”--captures in sound and print more effectively what the soul really is. Unfortunately, we also know not everyone is open to hearing another’s language or learning more about it. Regardless, I believe that with language comes an open invitation to understand others more deeply…and with that their love for their home and their passions.

Because of all that I know Nadal’s first language may be tennis, but like so many from his homeland, they are proficient in soccer….or shall we say futbol? 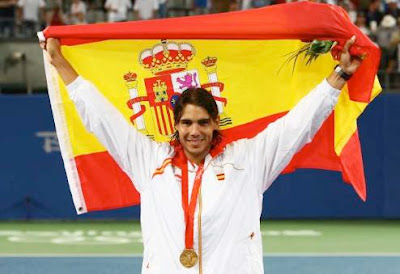