Can Anything Good Come Out of Citizen’s Park?

Philadelphia: for a brief period of time, the City of Brotherly Love, the home of Benjamin Franklin, Rocky, and the greatest sandwich in America, also served as our nation’s capital. Those who know and love it realize their National League Champion baseball team is getting a lot of attention, not for how they are performing, but how their fans are. On April 15, a 21-year-old fan allegedly vomited intentionally on the 11-year-old daughter of an off-duty cop, Easton Police Capt. Michael Vangelo. Less than one month later, 17-year-old Steven Consalvi ran on the field and was tasered by a cop. The Chicago Breaking News article Tasered teenager, family apologize to Phillies reports that “Consalvi’s zapping has been viewed more than 300,000 times on YouTube, and it’s been a big talker with fans at ballparks far and wide in the past few days. Few have offered their sympathies.” My guess is by now, that number has doubled, if not tripled. 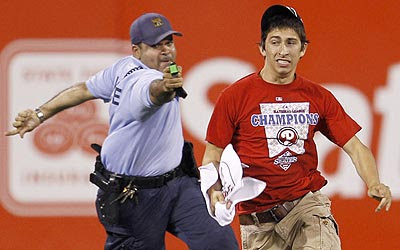 What strikes me in the video clip isn’t the impetuous yet (somewhat) likely decision of a teenage boy or the questionable use of the taser gun, but the reaction of Phillies’ first baseman, Ryan Howard. Behind the glove or not, clearly, he’s laughing. Some players are shaking their heads, others hold looks of amusement but Howard and many fans are cracking up. And, I found myself laughing with them and because of them.
Said incidents have raised two questions for me
I hope you read the humor in that! In his article Laughing with the Saints: Joy, Humor, and Laughter in the Spiritual Life James Martin, SJ writes "Jesus himself embraces people with a sense of humor or even sarcasm. You'll remember the story of Nathaniel, sitting under the fig tree when he is told by his friends that the Messiah is from Nazareth. Nathaniel says, "Can anything good come out of Nazareth?" Which is a joke about how backwards the city was. That doesn't bother Jesus one bit. In fact, it seems to delight him."There is an Israelite without guile!," 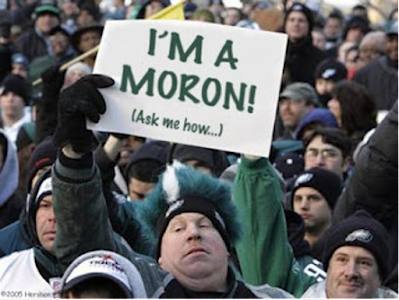 Philadelphia has always been known for having tough crowds—the Vet had a jail inside the stadium to deal with unruly Eagles fans. I’m not truly worried about Philly aka "Filthy" and its sports fans. They too are without guile. I am however a little uncomfortable about my reaction to both events. I’m sorry, but I can’t read the response from Vangelo “it was the most vile, disgusting thing I've ever seen and I've been a cop for 20 years." and not start laughing. As Martin points out, Ecclesiastes 3:4 said there is an appointed time for everything, and a time for every affair under the heavens…. A time to weep, and a time to laugh. I think it’s okay to ask ourselves is this an appropriate time to laugh? The choices of sports fans on the field and in the stands will continue to provide us with instances by which to determine “yes or no.”
Perhaps better answers to my first question are the answer to the second. And if not, Philadelphia natives will be quick to point out, the boorish fan who threw up on the cop and his daughter is not from Philly, but south Jersey.