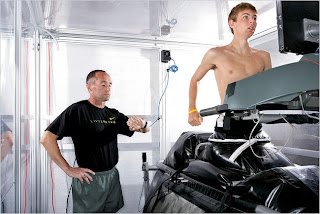 As a three time champion of the New York Marathon and victor of the epic “Duel in the Sun” the 1982 Boston Marathon, it’s hard to believe that just one day can foretell so much about a person’s life. I smiled as I could easily imagine a young Salazar, now a coach with Nike’s Oregon Project, succeeding in his own rite while advising his pre-teen peer competitors with specific strategies. Early on, Salazar saw his own gifts as a runner and a “coach.” Given the stereotype of runners as fitness freaks with healthy hearts, it is equally difficult to imagine just how many times Salazar almost died while running; yet, what may be more surprising is that each time he was confronted with death, he was not afraid.

At eleven years of age, Salazar witnessed death when he saw a young boy drown in his neighborhood pond. Even at such a young age, he was able to pray to the Blessed Mother saying, “When I die, don’t let me be scared.” His prayer, atypical for a child, let alone a healthy one, was answered years later at the popular Falmouth Road Race in Cape Cod in August of 1978. Salazar ran so hard that afterwards he collapsed from extreme heat exhaustion and was administered last rites in the race tent. Although his recollections of the experience are vague, he shares, “The most important part of that event is that I truly believed I was about to die. And I had a peace that I was going to be seeing Christ momentarily and I wasn’t scared.” 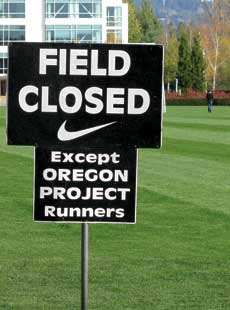 Since Falmouth, Salazar’s experiences with death have followed him in his running and coaching careers. Four years later at the 1982 Boston Marathon, Salazar pushed his physical limits to the extent that after winning, he received six liters of fluids intravenously. In 2007, Salazar encountered death yet again with a severe heart attack, but despite these setbacks, Salazar reaffirms his faith and belief. “While coaching, I had my heart attack just 100 yards from here (on Nike’s campus) where I flat lined for 14 minutes. My sons were with me when I woke up for the first time at the hospital and I said ‘I’ve got to go somewhere. I’ve got to go now.’ And they said ‘where do you need to go?’ And I said ‘well, I’m speaking to a woman.’ And they said ‘who are you speaking to?' and I said ‘I don’t know but it’s either the Blessed Mother or one of the saints.’ I believe the Blessed Mother was there and comforting me. Again, I wasn’t scared at the end.”

Training, discipline and a high threshold for pain enable runners like Salazar to push the limits. Considering what he has endured, how and why does he continue to run and coach? The obvious and immediate answer is that he does not fear death. However, the more one learns about Salazar the more one understands what keeps him alive is his deep love for running, his Catholic faith, and what one teaches him about the other.