The Problem...and Complexity of Anger: What We Can Learn from Novak Djokovic

I wish I could say I watched what transpired at the 139th US Open in real time. Instead, I write my remarks from my perch—having watched countless replays, from multiple camera angles of Novak Djokovic's default in the fourth round match against Pablo Carreno Busta. The court of public opinion has reviewed, analyzed, criticized and weighed in on Djokovic's past, his present and concerns about his future. Now, I too can play the role of both judge and jury. Honestly, I'd rather not. Does that make me sympathetic to him? I'll let you be the judge and jury of that.  No, the purpose of this blog post is not to judge the best player in the world but offer insight into what we might learn from him and the problem of anger. 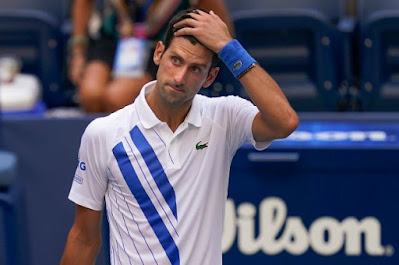 Tennis is physically and mentally demanding (understatement of the year). Outbursts of emotion—both positive and negative—aren't uncommon. Players collapse on the court after a huge point and climb into the stands after a great win. In the same match, tempers rise, profanities are uttered and rackets get broken. As fans, we are witnesses to varied, dynamic responses—especially at the US Open!

Novak Djokovic is the number one tennis player in the world. At the age of 33 he already has 17 Grand Slam titles to his name. While sports fans talk about Roger Federer and Rafael Nadal as the great players in the game, tennis fans know that it's quite likely Djokovic will surpass them both as the winningest player of all time. All three athletes are different in style and in temperament. King Fed is known as calm and collected, Rafa is powerful and emotive and The Djoker is flashy, electric and temperamental. 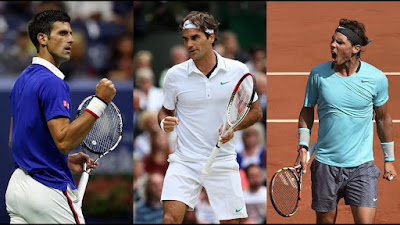 As reported on CBS news when Jon Wertheim asked Rafa has never broken a racket. Wertheim said: "You haven't broken too many rackets in competition have you? (laugh) How many? Do you know the total?

Jon Wertheim: What is it?

Jon Wertheim: What is that about?

Rafael Nadal (Translation): My family, they wouldn't have allowed me to break a racket. For me, breaking a racket means I'm not in control of my emotions.

The same cannot be said of Djokovic (see French Open 2016). He is known for angry outbursts on the court, damaging equipment and in the process—his reputation. It also led to his disqualification before the completion of the first set of his match on September 6, 2020.

The USTA issued a public statement about the ruling. It says "In accordance with the Grand Slam rulebook, following his actions of intentionally hitting a ball dangerously or recklessly within the court or hitting a ball with negligent disregard of the consequences, the US Open tournament referee defaulted Novak Djokovic from the 2020 US Open. Because he was defaulted, Djokovic will lose all ranking points earned at the US Open and will be fined the prize money won at the tournament in addition to any or all fines levied with respect to the offending incident."

On Instagram, Djokovic said "I need to go back within and work on my disappointment and turn this all into a lesson for my growth and evolution as a player and human being. I apologize to the @usopen tournament and everyone associated for my behavior. I’m very grateful to my team and family for being my rock support, and my fans for always being there with me. Thank you and I’m so sorry." Rather than be the judge or sit in the jury box about his actions and his words, I want to consider what we can learn from this unfortunate event. 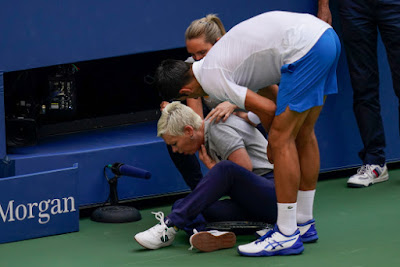 First, the feeling of anger is not in itself a sin, as with all emotions. However, anger can very easily lead to other sins—most notably wrath, or rage. Anger, when it becomes wrath can culminate in actions that are harmful to God, self and others. Rage gets away from us, and leads to unintended consequences—often in the form of both mental and physical pain. But anger isn't one-dimensional is it. Anger can be justifiable. If someone disparaged your mom or uttered racist jokes with no recompense, anger is appropriate. Justifiable anger appears even in sports. The missed pass interference call, NFC championship game between the New Orleans Saints and Los Angeles Rams in 2019 comes to mind. The tennis player gets called out when they very clearly saw it hit the line—sometimes more than twice!—can't just sit back and remain calm. What to do? Let's consider its complexity.

In the article "Why So Mad?" Andrew Santella writes,

As one of the classic seven deadly sins, anger holds an exalted place but is a bit of a misfit among the group. It is the only one of the seven that doesn’t pay off in our self-interest.

For people like me who have never been unusually prone to anger, that makes the emotion difficult to understand. There’s no obvious payoff to a fit of anger. Only an outburst, hurt feelings or, worse yet, some violence. Hardly ever any real resolution to the problem that started the whole thing. Where’s the temptation in that?

No pay off for Djokovic. In fact, he was fined $10,000. And, it's fair to say Roger Federer may sympathize with Santella—in his disposition, but how might Djokovic respond?

In The Enigma of Anger, Garrett Keizer writes that his anger “has more often distressed those I love and those who love me than it has afflicted those at whom I am angry.”

Knowing that anger doesn’t always pay doesn’t necessarily make it easier to control it. Which may help explain why anger is so prominent in our lives. Our religious tradition centers on a God who, when provoked, turned people to salt, drowned entire armies, and sent floods and pestilence as tokens of his wrath. The most famous episode of anger in the New Testament is Jesus lashing out at the money changers of the temple. It might be the most modern scene in the Gospels.

If you did watch the match, you will see that Djokovic was struggling with his own game and rising to the level of his opponent. Though nothing close to a professional, the athlete in me understands the mounting frustration/anger he had to have been feeling. Athletes—What do you do with the anger when you can't bring your best self to the game? When you are the one making all the mistakes? We can see from this incident what NOT to do. That's not always a bad way to learn...!

We’re also deeply suspicious of our anger. The Romans preached self-control, and Renaissance essayist Montaigne advised marshaling our anger and using it wisely. He urged people to “husband their anger and not expend it at random for that impedes its effect and weight. Heedless and continual scolding becomes a habit and makes everyone discount it.”

That advice recognizes one of the paradoxes of anger: It’s often destructive, it’s often a waste, but every once in a while it works. It can fuel our drive to achieve, it can help us maintain our self-respect, it can help stop the world from walking all over us.

Great advice, Fantastic insight. It is destructive. It is a waste. He lost his chance to win another title. Perhaps anger fuels Djokovic to play better? The problem is that it must be channeled constructively. Clearly Nadal learned to manage that emotion that is pumping through his veins; perhaps his family insisted upon that. Community can help us with challenges must larger than ourselves

The problem with anger is the unintended consequences that result from it. I sincerely believe that Djokovic did not intend to harm the line judge in the least. But he paid a steep price for harboring this emotion through a ball—the same instrument that leads to victory and in this case defeat. 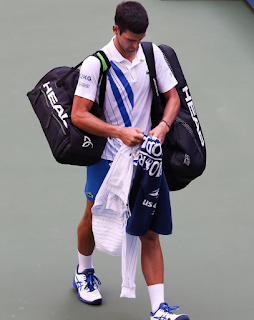 Djokovic said "This whole situation has left me really sad and empty. I checked on the lines person and the tournament told me that thank God she is feeling ok. I‘m extremely sorry to have caused her such stress. So unintended. So wrong."

Unintended, yes. Wrong, yes. Let us remember to count to four. Think of our families. And if you're still angry go ahead and throw down a few choice swear words and/or offer a prayer. In fact the webpage "13 Powerful Ways for Overcoming Anger and Resentment" speaks to the complexity of this emotion. Each one is worth considering for ourselves and the many ways we must work with and through this emotion. Peace.

Lord, bring peace to my mind and my heart as I feel angry at the situation I am in. May I take hold of your promise that you will never leave me nor forsake me. In whatever circumstances I face that produce anger in my heart, remind me that you have not left my side and you never will. When you are with me I can trust you to fight my battles, I do not need to allow anger to take control. Give me your peace Father, may it rule over my life. Through Jesus Christ, our Lord, Amen.