Finding Hope in an Orange October

The seniors enrolled in my Sports and Spirituality course are the first cohort to have been born after September 11, 2001. Every year at this time, I show “Nine Innings From Ground Zero,” an HBO Sports documentary that chronicles how baseball provided a way for people to come together in the aftermath of tragedy and loss. This film speaks truth to power: my students are aware that they have grown up in a world that is markedly different than the one just days, weeks and months prior to that fateful day. And, how true that is 19 years later. That realization led me to consider What might “America’s pastime” offer amidst the many struggles we face today? I then thought what a bold question. Our challenges are many and multi-faceted. I have but one idea.... Orange October. 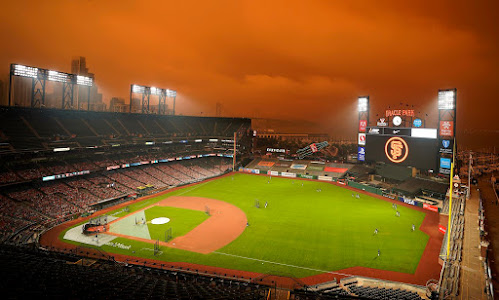 Yesterday might have been one of the stranger and more challenging days in all of the 18 years I have lived in San Francisco. I didn't matter if you woke up and 7:00 a.m., 9:30 a.m. or even 11:00 a.m., you would have thought it was the middle of the night. Words and phrases used to describe the day include Mars, Apocalyptic, Return of the Jedi, and Blade Runner 2049. One friend noted that he is waiting for the Nile to turn to blood....

Living in the City by the Bay has not been easy in COVID-land. We were among the first to shelter-in-place and remain one of the most restricted domesticities in the country. Our homeless population has taken to tent cities and is ever growing. A 49-square mile venue that became the most expensive place to live in the United States is riddled with vacancy, unemployment, increased crime and filth. To say the struggle in the City of St. Francis is real is no lie. I see and pray with and through that every single day. The natural beauty, the sound of the foghorns, easy access to great golf, friends and neighbors that I cherish have kept me sane. However, the orange sky was a tipping point. I wanted to think of it as cool but the reason why it was happening weighed heavily on my heart.

In the Explanation Behind California's Orange Sky, Allison Rogers writes

By the time sunlight reaches Earth's surface, it's filtered down, leaving behind the blue sky we love to see. The term for that is Rayleigh Scattering. The smoke from wildfires filled the western sky, filtering the sun's light even more. That left the sky with the orange hue that was widely captured on social media.

Reason or not, it's bizarre. Meanwhile, the wildfires continue to rage in parts of the state.

Experts now say six of California's largest wildfires have occurred in 2020. The largest wildfire is still ongoing. Another one of the largest is the Creek Fire outside of Fresno. Aircraft crews are flying out to tackle the blaze.

According to the California Department of Forestry and Fire Protection, wildfires burned more than 3.1 million acres in California since the beginning of the year.

I am sure you saw photographs. My Facebook feed was dominated by 40 shades of orange. So many places in California are hurting. And yet, the connection could not be lost. If baseball could offer something to New Yorkers post-9/11 what might is offer us in a time like this.

And then I remembered: Orange October.

In their creative marketing the San Francisco Giants have always pushed for an Orange October. The recent skyscape however convinced me I would never want one of those again. But, I decided to play with the terminology. I stayed with the concept. In years past, I love those banners that hang along the Embarcadero. I cherish those banners that hang in and around Oracle Park. I typed in Orange October and a profile of the 2012 World Series team emerged.

I watched. I cheered. I laughed. I smiled. I needed all of it.

On one level watching Orange October 2012 World Series: Inside the Clubhouse wasn't easy. I miss going to games and giving high fives to complete strangers. I have wondered when I will be able to hug my friends—especially my fellow Giants fans again. I saw sunny, warm skies over San Francisco. I sometime question if our best weather really will come. 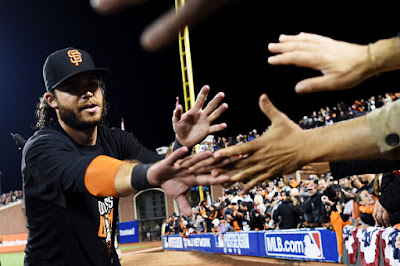 And then, I remember why this Orange October was so memorable. This was the team that faced six elimination games only to sweep the Tigers in the World Series. This trophy is the middle child (I am one) and reminds me that each one TRULY is special. I delighted in revisiting the unique personalities of the team—from The Franchise: Tim Lincecum to Hunter hyper Pence. I saw Pablo Sandoval do what so few players have done—hit three home runs in a single game (off Verlander, thank you very much!). I stood in those bars. I attended that parade. I called a fellow Giants fan after watching just to further unpack these memories.

Two months ago, no one knew if baseball would continue. With an outbreak of COVID among the Miami Marlins and the St. Louis Cardinals, most sports fans thought the season would come to a close. But here we are, mid-September and teams like the Giants are competing for a playoff spot.

In the aftermath of 9/11, professional sports were suspended for a week. In due time, they resumed and became venues for people to express their hope, share their grief and spend a few hours doing something different. 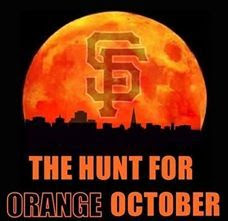 Orange September will pass. I need this reminder—the proof, the evidence, the very hope—that when it does, the high fives, cheers, home runs, comeback victories and celebrations will only mean that much more. Thus, And I look forward to the Orange Octobers to come....

Love and prayers in a special way for those who grieve on 9/11 and those affected by the source of the orange sky. Peace.

Email ThisBlogThis!Share to TwitterShare to FacebookShare to Pinterest
Labels: 9/11