Big Night: The Champion's Dinner at The Masters

It's always fun to ask what if. What if you had your choice of playing golf on any course with any foursome—Where would you go and who would you include? What if you could visit one sporting event—What would it be and where? What if you could attend any dinner party—Where would that be and what would you eat? My question is a timely one. Why? Because the answers to those questions involve a singular location connected to a specific event. Welcome to Masters Week. And, tonight is the Champion's Dinner. It is a Big Night—a sacred meal in a sacred space. Here's why. 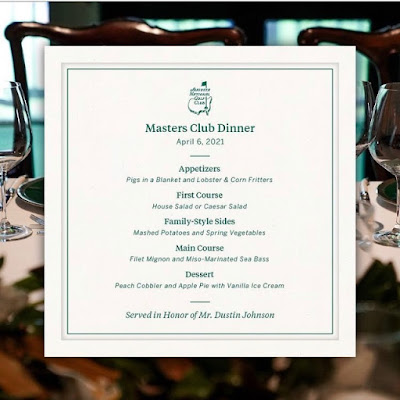 As written in Seven Days in Augusta, "It's one of the most exclusive dinner reservations on the planet, and it doesn't even take place on a Friday or Saturday night. It is, however, one night a year."

Tuesday night of Masters week, past champions gather in the Augusta National clubhouse for a dinner hosted by the defending champion. No coaches or caddies, WAGS or wannabes. No media either. To say its exclusive is short-sighted. It is men only. It's not a large crowed. It's not even subject to invitation. I don't think there's anything else like it—I can only imagine.

The Champions Dinner was first put into place during the 1952 tournament when defending champion Ben Hogan gave a dinner for the previous winners. Hogan proposed the formation of the Masters Club, with its membership limited to Masters champions. He wrote "my only stipulation is that you wear your green coat." 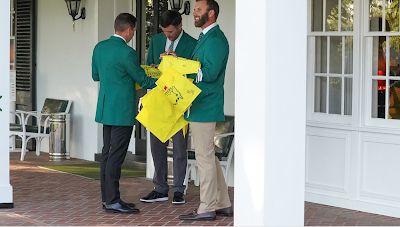 Dustin Johnson, the 2020 champion posted the menu for tonight's gather via Instagram. Cannizzaro writes "the menu choices reveal something about the players and where he's from." For example, Scotland's Sandy Lyle served haggis and Germany's Bernhard Langer served Wiener Schnitzel. When I saw Dustin Johnson, the 2020 champion's menu posted via Instagram, I wasn't the least bit surprised. Though entertained by Pigs in a blanket as an appetizer, I pegged him for a fillet mignon all the way. Bubba Watson served the save menu in 2012 and 2014: caesar salad, grilled chicken breast with a side of green beans, mashed potatoes, corn, macaroni and cheese and cornbread. What more would you expect of a guy from Baghdad, Florida?!

And the greatest meals—the ones we remember and cherish—offer sustenance far beyond the food on our plate. We are nourished by the conversation, the stories and the word made flesh. 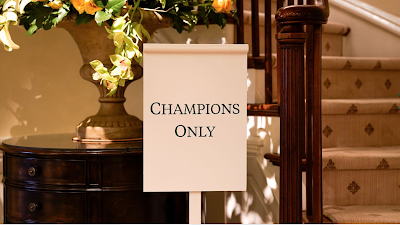 As creative and distinct as the menu may be, Phil Mickelson's favorite part of the night is of the Champions' Dinner is the conversation. He said "those dinners are usually the chance for the older guys to tell stories. Gary Player and Bob Goalby are great storytellers and they tell some fun ones. It's always fun when Jack Nicklaus and Tom Waton tell stories because they always have some good ones of players I watched growing up. Some of us will add things, but usually it's the older guys telling the stories. I like to listen that week."

Cannizzaro writes "Byron Nelson used to serve as the dinner's unofficial host for years before Sam Snead took over and then Ben Crenshaw. Mickelson credits Player with being a conversation starter who elicits stories from everyone.  It's always fun—lots of jokes and stories," Player said.

Thinking about the gathering that took place this evening—who is there and who is not—notably the five time champion Tiger Woods, I couldn't help but think of myself: Big Night. In the senior selective "Faith, Film and Fiction" students are tasked with watching this 1996 classic. They are invited to consider how this movie demonstrates a eucharistic celebration. My friend Chad, the teacher asks students to respond to the following. He writes

A “Catholic imagination” acknowledges a universe where sacred places and times can be experienced . What experiences/ memories do you have of sacramental meals? What about those meals helped you experience communion and the sacred? What made these meals different/ special?

I see these questions and I can only wonder: What if I were allowed to attend this dinner? 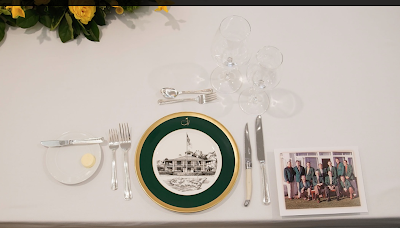 I know my answer. I would teach this group about the spiritual event they are privy to. They are sharing a meal and sharing stories. What makes is meaningful and memorable is that the menu represents more than one man's personality or homeland. At this table, the elders are respected and revered. They share their wit and wisdom. Those gathered at table listen and learn and one day will have their chance to impart their own nourishment for the self and the soul.

And in two days, competition will unfold on the greatest of golf courses. The players will make their mark. The crowds will respond. The beauty of Augusta National will shine. A new work of art awaits....

Email ThisBlogThis!Share to TwitterShare to FacebookShare to Pinterest
Labels: Champions' Dinner, The Masters