Saints, Sportsmen, Sports and Spirituality Two of the Five Things You Might Not Know About the Sacraments

In addition to the fact that there are seven of them, what do you know about the sacraments? Likely answers include: a priest administers most of them, but a deacon and anyone of the baptized faithful can administer a few others. The writer of this blog can never receive one (Holy Orders), but has already received an unlikely other (the Sacrament of the Sick). For Sports and Spirituality purposes, let's consider five things you might not know, or if you do, perhaps this will be in a new context....

1. There are Sacraments and there are sacraments.
The proper noun refers to the seven Sacraments in the Catholic tradition: Baptism, Reconciliation, Eucharist, Confirmation, Marriage, Holy Orders and Sacrament of the Sick. These Sacraments are signs through which the Church manifests and celebrates its faith and God's saving grace.

The common noun "sacrament" in the Catholic tradition can be anyone or anything. For example, pictured here are two prominent symbols in a classroom: the crucifix for Christianity and the hockey stick for its sport. But what if I told you that the hockey stick was a sacrament. How might that be?

Suppose that hockey stick was given to this teacher by his wife on his birthday a year after their twin daughters were born. He loved to play hockey every single day if and as possible, but in the last year, that free time is a thing of the past. Each daughters' special needs trump the need to show up at the rink. 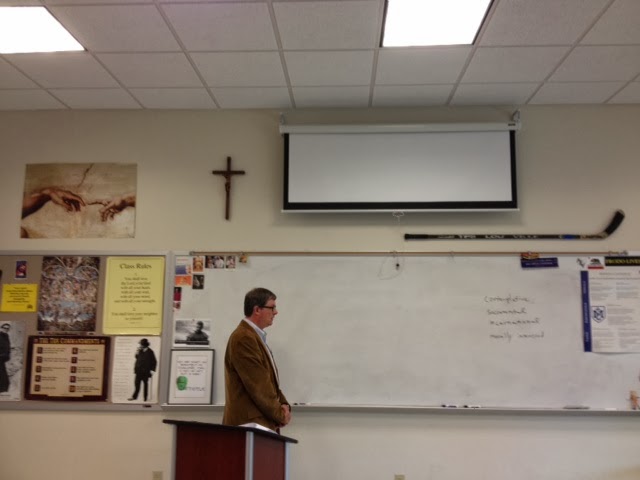 His sacrifice however has not gone unnoticed. In gratitude for his love, support and assistance, his wife went out of her way to get his hockey stick signed by the great Wayne Gretzky. It says "Congratulations on a big year!" That hockey stick is much more than a finished piece of wood, it's a sacrament.

2. Sacraments are a visible sign of God's invisible grace.
Proper and common noun alike verify this reality and the Nicene Creed attests to it: I believe in things visible and invisible. I do. I believe in things I can never see—like love, God, and the Resurrection, yet God knows us too well. Our humanity demands that we see in order to believe. And that is why the Gospel passage of the Doubting Thomas is of great import.


Thomas, called Didymus, one of the Twelve, was not with them when Jesus came. So the other disciples said to him, “We have seen the Lord.” But he said to them, “Unless I see the mark of the nails in his hands and put my finger into the nail marks and put my hand into his side, I will not believe.” Now a week later his disciples were again inside and Thomas was with them. Jesus came, although the doors were locked, and stood in their midst and said, “Peace be with you.” Then he said to Thomas, “Put your finger here and see my hands, and bring your hand and put it into my side, and do not be unbelieving, but believe.” Thomas answered and said to him, “My Lord and my God!”

I absolutely love Caravaggio's painting "The Incredulity of Saint Thomas" because it depicts a sense that God is willing to meet us more than half way. The Risen Christ has let Thomas, deep into his wound. He lets him touch that which is painful and real. In spite of Thomas' skepticism, He invites him to share in His pain, His Humanity, His Divinity— His resurrection! We often forget that Thomas carried his own wounds. He loved the Lord deeply; Jesus' death was a great loss. A popular public speaker Michael Pritchard says that "pain shared is pain divided." God gives the increase.

Furthermore, the Lord knows we are earthly creatures—we must touch, taste, see and hear to understand. We need the invisible made visible. Sacraments do that. I hear my sins out loud when I confess them to a priest, I taste Jesus' body in the Eucharist, my forehead was dripping with the seal—the chrism oil—used to affirm the promise my parents made at my Baptism. And with the Sacraments come God's grace—a gift, literally a favor. Grace attends to what we need—faith, forgiveness, love, peace, healing, nourishment, etc.

But we need not go solely to a priest or a church to encounter God's grace. The sacraments can be found in unlikely people and places. Perhaps it was a Yankees baseball game after 9/11 (healing) or a framed picture of Payne Stewart at Pinehurst No. 2, U.S. Open 1999 (love and peace). The sacraments abound if we have the eyes to see them.
Between now and the next posting—the remaining three things you might not know about the sacraments—look for them. Perhaps you will avail yourself to one at daily Mass, perhaps your prayer tonight will be for another. God's grace abounds.

Posted by Anne Stricherz at 9:16 PM