The Via Negativa: Steve Nash is not God.

Negative theology or Via Negativa (Latin for "Negative Way")—is a theology that helps one to understand what God is, by what God is not. To me, it’s quite simple--a square is not a circle, it’s not a triangle either. It may be a rectangle but it does not have unequal sides. Because not all matters in theology are objective, however, this theology is practical and especially helpful. Essentially we are attempting to describe the indescribable. For example, literature makes great efforts to outline and identify what is beauty—a subjective matter. Beauty may indeed be “in the eye of the beholder,” but beauty is certainly not rape, it is not napalm and it is not bullying.

I hope we can all agree, objectively speaking that the Summer 2010 alumni magazine of Santa Clara University is a handsome cover. It features Steve Nash ‘96, a native of Vancouver BC, holding the Olympic torch. I was hoping to read a thoughtful piece about Nash’s athletic endeavors since his success at SCU; during his senior year his team made it to the “Sweet 16” round of the NCAA basketball tourney. Perhaps he had a special role in the 2010 Winter Olympics, I thought. Instead, information about Steve Nash was limited to the “Letters” section. 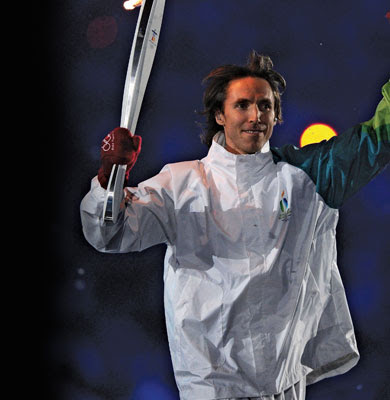 This surprised me for three reasons. One, it seems unlikely, at least to me, that a “letter to the editor” would drive the content for the cover. Second, the author, Brian Doyle is the only non-alum to submit a letter that was published (although the author of this blog and reader of the magazine is not an alum either). He is the editor of Portland Magazine, the alumni publication from the University of Portland. Third, Doyle’s letter is entitled “Thesis: Steve Nash is God.” Steve Nash is a great many things, but Steve Nash is not God.

Make no mistake about it—Steve Nash is an incredible athlete and basketball player. Doyle points out that he “was named the most valuable player not once, but twice.” He adds “He’s actually better with age, and how often can you say that?” Steve Nash may “arguably the best point guard in the world, a remarkable statement considering that he’s older than Chris Paul…etc.” but he’s not God. He is not the Alpha and the Omega, the unmoved mover, or the primary source. I know Brian Doyle was trying to make a point, and employed humor to emphasize his point. Point is taken, but this point has also provided grounds by which to apply the Via Negativa.

Doyle reports that Steve Nash “eats no sugar, just like God.” In my 12 years of teaching theology I have yet to come across a proof for God that speaks of God’s dietary preferences. “He lives in a place filled with light, just like God.” I don’t care how many days of sun they have a year in Phoenix. Considering the recent immigration laws passed in Arizona, this is quite a stretch. And “He went to a Jesuit university—just like God.” God is all knowing, omniscient, but God did not go to college. 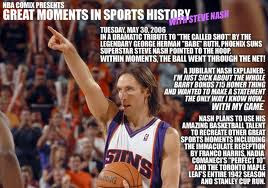 It may be difficult for negative theology to lead us to a perfect understanding of God, but the goal is that it will get us close. And in that spirit, I concede that Doyle some analogies work even if they are limited. He writes “Steve Nash has children, just like God.” Many people relate to God as father (or mother ), and many people are fathers and mothers; they have children. Considering some of the sacrifices my parents have made for me, I concur—they too are like God. “He has a sense of humor and can write his name, just like God.” In a game where men take themselves far too seriously, it’s good to read Nash has kept his humor. And in a world that is often difficult and trying, it’s just as important for us to remember that God has a sense of humor as it is for us to know that God writes God’s name. He does this not on stone, but in our hearts.

Perhaps that would have been a better title for this letter to the editor--Steve Nash: A man of humor and heart, just like God.
Posted by Anne Stricherz at 8:07 PM