In the wake of George Floyd's murder, the number of Americans reading, talking and learning about systemic racism, how to become anti-racist, and what policies and procedures hold people of color behind is significant. "Just Mercy" is a popular book included in that conversation and was made into a movie, released last Fall. It written by one of my personal heroes. Bryan Stevenson. If you feel like I do, allow me to make a recommendation along a similar story line. I invite to read and learn about of one of the greatest basketball players of all time, Maya Moore. 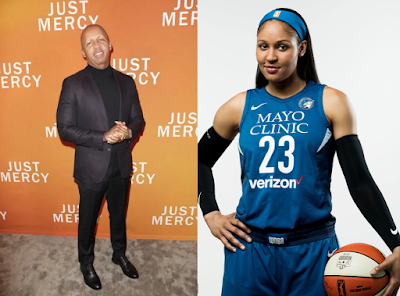 At first glance, one might wonder what Moore and Stevenson have in common. I have no idea if Stevenson, an American attorney who founded the Equal Justice Initiative plays hoops. And prior to her announcement in The Player's Tribune to leave the game, I don't know that many people considered Moore to be a social justice activist. Yet, as written in "How Golf Can Root Out Racism" assume nothing. Let people tell their own story. I encourage you to read "Just Mercy"  as you will learn Stevenson's. In the meantime, here's Maya Moore's..it's a good!
ESPN reports, "At 29 years old, she'd already won four WNBA championships and a league MVP award. She was the 2011 WNBA Rookie of the Year. She was a six-time WNBA All-Star and a five-time All-WNBA first-team honoree. She had won three consecutive championships with her club in China, Shanxi Flame, as well as a EuroLeague Championship with Russian powerhouse UMMC Ekaterinburg. She had won two Olympic gold medals with Team USA. At the University of Connecticut, she'd won two national championships and was a four-time consensus All-American and the only player in women's college basketball history to win the Wade Trophy three times." ESPN's Katie Barnes said, "She is so versatile: she can play four positions and guard four positions.  She's so fluid. Her jump shot is truly magnificent. As someone who grew up in Indiana, I know a good jump shot when I see one." Her game is a beautiful thing to watch.

On February 5, 2019, Moore announced in an article entitled The Shift that "I will not be playing professional basketball this year." It was sudden. It was unexpected. Some have said it's the equivalent of Michael Jordan leaving in 1993. Why did Moore do this? She writes:

There are different ways to measure success.
The success that I’ve been a part of in basketball truly blows my mind every time I think about it. But the main way I measure success in life is something I don’t often get to emphasize explicitly through pro ball.
I measure success by asking, “Am I living out my purpose?”
I learned a long time ago that my purpose is to know Jesus and to make Him known.
Some of you may know about the verse from the Bible that I include in my autographs: Colossians 3:23.
I take the time to leave people with a little insight into who is the foundation of my approach, passion and motivation.
“Whatever you do, work at it with all your heart, as working for the Lord….”
My announcement is about how I’m shifting the focus to the whatever.
My focus in 2019 will not be on professional basketball, but will instead be on the people in my family, as well as on investing my time in some ministry dreams that have been stirring in my heart for many years.
I will certainly miss the day-to-day relationships with my teammates and basketball family this season, but my no for the 2019 pro season allows me to say yes to my family and faith family like I never have before.
I’m sure this year will be hard in ways that I don’t even know yet, but it will also be rewarding in ways I’ve yet to see, too.
I’m thankful to my Lynx family and others close to me who have been walking with me during this shift, and I’m excited to see what the future holds.

Moore believes that success and her purpose in life is to live the Gospel. She has heard the cry of the poor. She wants to be a voice for the voiceless. She said, "we need to look at what matters most— which is each other, humanity. Protecting people and loving one another."  to me, Moore embodies a popular song from my childhood church choir: They will know we are Christians by our love."
Moore explained her departure from basketball through her actions., her sacrifice, and her love. Before stepping away, she regularly flew "between her Atlanta home and Jefferson City, fully committed to a singular cause: supporting the effort of Jonathan Irons to regain his freedom -- because she believes he was innocent." 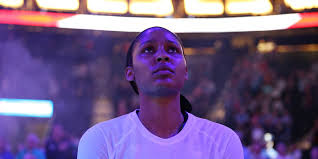 Irons has already spent 22 years in prison. A friend of her Godfather's, Moore is convinced that Irons was wrongfully convicted and is trying to get him out." Her efforts are akin to those of the Equal Justice Initiative. Her days aren't much different than those of Bryan Stevenson's.
There is much to learn about the American justice system through reading "Just Mercy." There is even more to gain through lived examples of Bryan Stevenson and Maya Moore. Their principled, selfless, and loving efforts serve as examples to me of two people who ARE answering a question we all should ask ourselves. "Am I living out my purpose?" What a success story....

Listen to the ESPN Daily Podcast here
For those interested in the discussion questions for Just Mercy used by the Notre Dame Women Connect Shared Read, I have linked them here
Photo Credits
The Shift
Michael B Jordan and Just Mercy
Bryan Stevenson
Maya Moore
Posted by Anne Stricherz at 10:09 PM